Mallet asked for clarification on Star Sapphire's continuity last post. You see, on the very same day I had Star Sapphire guest-blogging, she appeared in Infinite Crisis #6. Two Star Sapphires? How is that possible? Was Wednesday's Carnival of Feminists a hoax, a dream, or an imaginary story?

Click Here for a Short Guide to Star Sapphire

The Zamarons are my favorite alien race in the DCU. They look like human women, and dress in Ancient Greek armor, because that is dramatic shorthand for Dominant Women. Culturally, all of the stereotypes traditionally assigned by our society to men, are traditionally assigned to women on Zamaron. The Masculinist movement (in fact, the only resident male ever seen on Silver Age Zamaron was dressed in medeval garb) has never started there, so these women are all still gloriously chauvinistic neanderthals. As extremely weird customs go, they have a doozy. The Zamarons are all immortal and ageless (The Only Resident Male Ever Seen on Silver Age Zamaron was an elderly man, but later issues revealed that the Zamarons are an all-female tribe who split from their mates and any males on the planet are displaced from their native world) except for their Queen, Star Sapphire. Their Queen is always an alien, an exact physical duplicate of her predecessor. I'm sure there's a heroic, touching story of the original Queen making a sacrifice for her people and a decision to honor her in a ceremonial manner, but to my knowledge it has never been written.

I love this species, mainly because I have a thing for stereotype-reversals. The masculine of their species are the Guardians of the Universe (Green Lantern's alien bosses) and the Controllers (also recurring antagonists, but much more malicious than their feminine counterparts), both tribes of males value cerebral ability and personal inactivity/distance, downplays individuality, but dearly love to stick their nose in other people's business. Both male tribes have formed and managed Universal Police Forces. The Guardians created the Manhunters, then the Green Lantern Corps, and the Controllers managed the Manhunters and managed the Darkstars. The female tribe of the species values physical ability and personal achievement, but are considerably more reclusive. They only show up when they need a new Queen.

Their Queen is called Star Sapphire, and it's presumably been a successful weird custom when they look anywhere but Earth. They generally use some sort of mystic mental control whenever they appoint a Star Sapphire. Each of the women has been a bit different, so I wouldn't call it a complete take-over by an alien entity. I suspect it's closer to the personality of the Queen merges with the personality of the host. On Earth, this leads to trouble. It's probably a cultural thing. 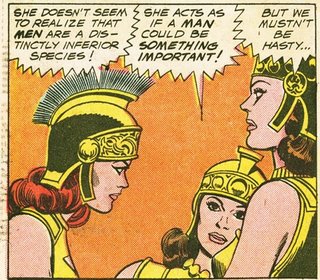 Star Sapphire I: Profiled in detail here, all you really need to know about this nameless classic Flash rogue (one of two females in the Golden Age Rogue's Gallery) is that she lived in the 7th dimension, was apparently kicked off of Zamaron for incompetence, and spent the remainder of her years fighting Golden Ager Flash Jay Garrick. As I gather, he never actually defeated her, she managed to do all of the work for him. I'm slow on my actual Golden-Age Flash reading (we're still waiting for the first appearance of the Shade to get archived), so I don't know much about this character firsthand. She sounds like your average cosmic despot, only her oppressed people were strong enough to give her the boot. Score one for Matriarchal Alien societies. 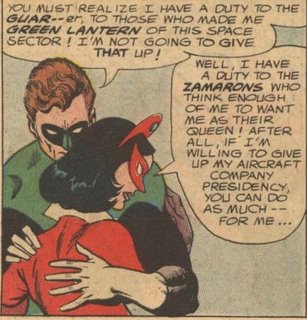 Star Sapphire II: Green Lantern's nightmare ex-girlfriend. Except, she was also his girlfriend. See, when Carol Ferris got a promotion at work, she dumped her boyfriend Hal Jordan because he was now a subordinate. The day before this happened, he had become a superhero. So, how did Green Lantern deal with being dumped on the eve of his superhero career? He started to date her in his superhero identity (without even trying to change up his personality or dancing style to throw her off). Hilarity ensued, as he spent half of his time with her thinking about how much he'd like to marry her, and the other half trying to keep her from asking him to marry her (as Carol was one of those progressive career women who would propose herself). Because he wanted to marry her as Hal Jordan, not Green Lantern. Ahhh, Silver Age Secret Identity Shenanigans. How many fine single-issue stories have you given us? Things continued with poor Carol as the underdog until the Zamarons came along and evened the score. Unfortunately, they forgot to tell Carol, and after every adventure as Star Sapphire, she forgot what's she'd been doing the entire time. She and Green Lantern were engaged for at least fifty issues without her ever knowing. It made for some wonderful "Courtship in Spaaaaace!!" type stories. 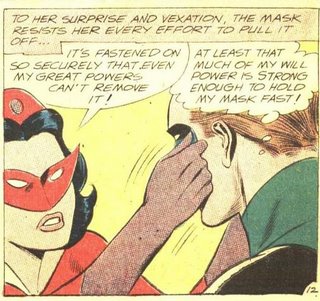 She was actually a very competent and viable threat to Green Lantern. In the first story, she very clearly did not want to win and was being forced to fight. She lost. Her second appearance, she competed with Green Lantern to see who could be the better superhero, with a trip to the altar as the prize. She won, but a fortunate bout of amnesia saved her from a lifetime of being Mrs. Hal Jordan. From that point on, every time she showed up she made reference to the impending marrige, but somehow always managed to be an antagonist. She's always proven a match on the battlefield, and at least once she stood toe-to-toe with Green Lantern UberNemesis Sinestro, the first and last time the two tried to work together. Her most villainous act was the kill Katma Tui in the ten most misogynistic pages in Green Lantern history. I've heard she was under mind-control by a male villain at the time, which actually makes it a lot worse.

Hal was more than willing to marry her, but somehow this relationship always fell through. Carol hasn't shown in up since Rebirth. She hasn't been Star Sapphire since before Hal caught that Giant Yellow Bug (from Outer Spaaace!!). She hasn't been a viable love interest since her marriage to cipher Gil Johns. Overall, she's the been the best Star Sapphire and the best love interest for Hal Jordan, and I very much want to see her back in those roles. And I know I'm not the only one.

Star Sapphire III: Dela Pharon. She showed up for one issue, and attempted to trick Hal Jordan into marrying her. That should give you an accurate assessment of her intelligence right there.

Star Sapphire IV: Debbie Camille Darnell. Debbie was introduced in the Secret Society of Supervillains, so I don't know too much about her (issues of that series are hard to come by in these parts) except that she never appeared after the series except in the recent JLA arc (Crisis of Conscience) with the rest of the old SSoSV. This tells me that she needs at least 6 men backing her up at every move, and is therefore a useless character. 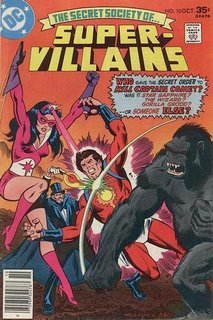 She is the one who appeared in Infinite Crisis #6 on Wednesday, and it was revealed to me there that she was of the "Man-hater" type of Supervillainess. I see no usefulness in that sort of Supervillainess myself. I much prefer the subtle misandry desplayed by female chauvinism that's inherent in the Zamaron culture. It's a mirror to our own, and makes for much more compelling social commentary (compare to misogyny via chauvinism in our own culture) than "I hate men, so I'd like to kill Green Lantern." Hopefully, we'll get Carol back soon.
Posted by Ragnell at 11:04 AM