I was going to agree with the anonymous commenter on Katma's pose in my last post, until I found this picture.

Unfortunately, panels like this are few and far between. Usually, the poses are reversed.

The problem with female poses...

I'm actually a big fan of reasonable cheesecake in comics. So long as the art is well-done, and there's something in it for me. Unfortunately, Equal Sights will elude us as long as sexuality overtakes practicality. When learning to draw in comics, certain poses are the first you work on. Those become the default pose. The default posing for women emphasizes the hips and breasts as much as possible. It makes it easy to tell at first glance the gender of the character. This combines with the natural "Prettying up" of the art to make an appealing cheesecakey pose for the cheracter. The "Sexy Woman" pose becomes "Comics Shorthand for Girl." It's just easier to draw that way. Drawing a character to be appealing makes sense. The problem inherent in this is what kind of pose is considered appealing. More specifically, the problem is what kind of pose is considered appealing for each gender, as Male and Female characters are usually drawn with different posture as part of the "comics shorthand" for their gender. 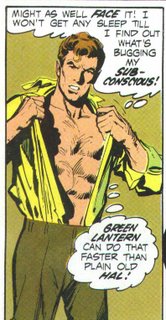 Yes, everyone in comics gets sexualized. But the men (Once again, note Hal's pose, this time at right) get to stand tall and strong and practical and still be considered desirable, while the women look as impractical as possible. This is because of that "shorthand for girl" learning. It drives me out of my mind to see martial artists and experienced fighters in comics, standing with their backs arched, their breasts up, and their butts back, messing with their center of gravity and their final health when they should certainly know better. The better fighting position has your feet shoulder width apart and your spine straight.

To illustrate this, I was going to use the Phantom Lady S-Spine of Torment and Triple-D-Cup of Doom combination, but I didn't want to cause any physical trauma from the sheer awfulness of it. Here's a much more palatable example: 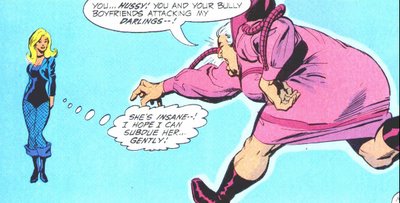 There is no reason Black firkin' Canary, one of the Top Ten Martial Artists in the DCU should be anticipating an attack with her heels together and her hip tilted suggestively upward. I don't know Judo specifically (so, please correct me if I'm wrong), but I do know that's a way to get seriously hurt.

Now, the above panel was rendered by Our Beloved Neal Adams, Wielder of Symbolism, Master of Visual Characterization, Patron Diety of Facial Expressions. As a fan of his, I'm inclined to give him the benefit of the doubt. She's at a relaxed position, and just now getting into the stance as she sees the attacker.

Except for one problem, a woman who spends as much time fighting as Canary does would not have such as vulnerable posture as her "Default stance." She would naturally use something more in keeping with her training.

I took a couple years of Karate in high school, and during this I started unconciously adapting the stance in my everyday stuff. I kept my spine was usually straight and my feet shoulder-width everywhere I stood. It had the effect of sticking my belly out, and tucking my butt underneath my spine. I'm naturally top-heavy, so my butt effectively disappeared. A year or two after I'd been to my last class, I noticed my friend Liz was constantly flirted with, by the guys I liked. I asked about it, and she advised me to stand more suggestively. Stick my butt out, angle my stomach in, and arch my back so as to emphasize my breasts. It was quite a change in posture, but I tried it and it took.

None of those men were worth the trouble, and by the time I learned that I'd adopted the posture into my natural habits and didn't feel it was worth changing back.

Until the back problems started. They are still there. My Doctor prescribed two sets of medication, which didn't work, before he gave me a sheet of annoying exercises I now have to accomplish every day. I also have a seventy-five dollar back brace that I need to use occasionally. It's only a mild problem right now, but it still keeps me awake sometimes, and it makes working difficult on the bad days. And according to my doctor, it's because of my posture combined with my chest.

Now, as as Chris kindly pointed out, this was thirty years ago and Adams was just learning to handle martial artists. Canary's posture got better as the series moved on. More than likely, he needed an at rest pose and used a picture of a woman standing like that. This would be all well and good, if it weren't for the fact that artists still do this. Models still do this. Television stars still do this. The "Sexy woman pose" is one that we all learn and internalize as little girls. This is what a pretty lady stands like.

She stands with her chest out, her back arched, her legs together, and her center of gravity compromised.

She stands in the most vulnerable position possible, the one from which it is the most difficult to prevent an attack.

She stands in the posture most likely to cause major back problems in a few years.