Greetings Earthlings, I am Star Sapphire, Sovereign of the Planet Zamaron, President of Ferris Aircraft, Super-Villainess, Much Maligned Strawfeminist, Recurring Green Lantern Antagonist, the Killer of Katma Tui, and, in the Grand Tradition of Supervillains Commandeering Comic-Book Blogs, your Guest Blogger for this evening. In a new twist, this was not a hostile takeover of this webspace, but I was actually invited to Host this, the Twelfth Carnival of Feminists, as Ragnell found the preparation too intense and Wonder Wimp--err, Wonder Woman couldn't make it. There was a slight problem with the Duke of Deception and apparently it could not be put off. In fact, they both insisted that I had do this before my wedding. 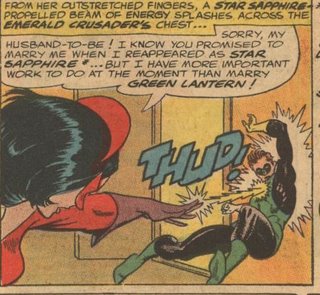 I have a superhero waiting at the altar right now, so let's get this show on the road.

The first category offered was Influences. The hope here was for "posts identifying the attitudes and ideas that we are exposed to growing up, the things that shape who we are and what we think, and pinpoint the effect on how women are seen in society." Hmmph. Why didn't the silly woman say that in one of the calls for submissions?

Either way, the first post tells us the real reason Wonder Woman wimped out of this. Andrea offers a cutting image analysis, using the picture that accompanied the first submissions call for this very carnival. She examines how, even when she is not supposed to be sexualized at all, Diana is still specifically posed to entice male readers. I'm planning on stealing that last photo manipulation for the next time we fight the Justice League.

In a very tongue-in-cheek post, Jake considers what a young child may learn about women from reading Silver Age Supergirl Comics. If actually fighting the "Maid of Might" counts for anything, you can add my word to his on this subject.

Allison goes in-depth on the Duke Rape case, the offenders, and the permissive judicial system that enabled this to happen. For those of you who have been off-world, under mind-control, time-travelling, visiting an isolated society, in deep meditation, dead, or otherwise pre-occupied during the past two weeks, there is a blog created that follows the tragedy in its entirety, Justice 4 Two Sisters, so that you can catch up.

Verbify on Signifying Nothing shares a discussion on what makes a television character seem real to the audience. Is it true that the criteria for relatability is different on this planet because of gender?

Lucy, who's own words are far better than mine, gives us the "tale of an ogre - that would be me - who is uncomfortably roped into a world where she is expected to do tasks with delicate little fingers that she doesn't have; and to master assignments with strength that's already sapped."

Heart at Women's Space ponders breasts -- Real Breasts, fake breasts, and the effect that the obsessive oversaturation of Barbie-doll hotness has on Earth-women.

I see I'm not the only one unable to escape "raunch culture." If you think your teenagers are dressing too trashy, you should see what a Supervillainess is expected to wear. There's a large amount of criticism for this culture, but Natalie cautions against criticizing women for their personal clothing choices.

RJ, at Bark/Bite considers the symbolism of the Ooompa-Loompas in Charlie and the Chocolate Factory, and what it implies about women in American society.

From there we travel back to the familiar ground of comic books, and what red hair signifies in a female character, at Redhead Fangirl.

The second category is Inspirations, and it turns out surprisingly few of you were given powers by alien matriarchies. Instead, other women, from Earth, seem to have influenced you to action. I never imagined such a thing!

Professor Pideritt compares Kim Possible to Wonder Woman, and asks if children's programming has made any progress in the past thirty years. Tackling much the same subject, Kalinara feels that He-Man and the Masters of the Universe raised the bar for portraying women in 80s children's programming.

100LittleDolls searches for progressive role-models in pop culture, and initially seemed to have found one, but wonders if sexualization counteracts the strength in this case.

The Concoction brings us news from Zambia, where women are actively taking part in politics and encouraging others to do so. Fikirte hopes that women in the United States will follow their example.

Deepa tells us about being interviewed by a class of young children in Kerala, the heartwrenching story of a young girl in that class, and the effect on her life.

A White Bear, guest-blogging for Bitch Ph.d, relates the surprising inspiration that brought her to Feminism, and in the commentary, readers share their own.

Cultural Reversal seems to be the most vague category offered up, and she doesn't clarify it for me in the program. Personally, I am fond of the Cultural Reversals that involve trading stereotypes to make a point about the silliness of stereotypes or trading up situations that traditionally involve one gender or another. It may refer to the slow backward trend that starts when we stop pushing for progress (as experienced recently in a backlash against masculinism on Zamaron), or a call to reverse the negative aspects of the Culture with positive action.

Mary Ann of Five Wells describes the male reactions to Mathmetician Sophie Germain, when they realized she was a woman.

Laura at Geeky Mom considers the negative implications of the word "Mom," how it reflects on her own identity, and resolves to reclaim the term as a positive name. Ragnell (owner of this very blog) is also interested in the negative aspects of language, and the label "Fangirl."

In the comic book world, analyzing Vampirella for offensive content is considered akin to using a four million dollar research grant to determine whether or not mice get scared by cats, so no one has ever bothered before. But Dan has found an essay by Andrea Dworkin which identified the precise problem with the closest thing the mainstream comic industry has to actual pornography, how what apparently stops it from "crossing the line" in fact makes it worse, and pounds out an overall worthwhile commentary on the portrayal of women in comics that has some fresh insights into the awfulness of Vampirella.

"Just when I thought I'll fill my blog with light, frivolous and cutesy, what-did-I-eat-for-brunch-and-other-enlightening-titbits-of-my-life kinda posts," Megha rants, "something comes along and schlep's me back into reality."

Uma is furious with the audacity shown when a woman gets shot from trying to stop street harassment.

Bumblebee Sweet Potato covers the modern woman's obsession with dieting, the reasoning behind it, the surprising mental strengths it makes visible, and what we could do if we focused our energy elsewhere.

Frankengirl ponders the value of common advice to "write what you know," and how limiting it is to women writers. I understand completely. My own autobiographical attempt had to be rescripted as a comic book before it was released, heavily edited.

Melchior had a mixed reaction to X-Factor #5, caused by the disturbing images found within the comic book (that he's reproduced within the post). He reexamines the images, asking, "While it's clear that Peter A. David wants to subvert the sexist trope of the woman who needs a man to deliver her from a dangerous situation, does he succeed?

"Birth seems to be ignored as a feminist issue among the blogs that I've been seeing," Tina the Radical Feminist Mom worries, "Lots of stuff about reproductive rights, whether or not to have a baby, but nothing about the feminist ramifications of how one actually has a baby." Hey look, at the bottom there's a bullet-point outline of the maternity/nursing culture they have on Zamaron. Yeah, I'll be having my baby there.

Artemis has been watching women fight other women. "And I'm sick of it," she says, "Sick of women tearing me down. Get it together sisters." Meanwhile, Super Babymama (I wonder if she's related to that jerk in Metropolis) dreams about being a better feminist than anyone else.

AfroFeminista saw dancing on International Women's Day, which revealed a mixed messages for the young girls in the dance group. "To what extent" she asks, "should the feminist movement especially that populated by younger women, embrace and give space to these sort of expressions - be they art, dance or written word?"

A street poll conducted by a South African newspaper about a politician who is on trial for rape recorded some horrifying attitudes towards the accuser, and in response GGernst says it's time for women to start decolonizing their minds.

Femme Feral hits upon another evil of Reality TV, which has done more harm to society than the entire Legion of Doom (not counting Lex Luthor, who has a producer credit on Trading Sidekicks). She writes about the misogyny in Real Housewives of Orange County, a show that seems specifically designed to make you hate women.

And then the catch-all category of Other, in case of submissions that didn't quite fit the rest.

Leisha experiences the reopening of old wounds, and realizes that "healing a wounded soul is never a finished task."

When the British Royal Couple visited Saudi Arabia, it seems that Camilla was given "honorary man" status, as evidenced by her wardrobe when compared to what Saudi women are permitted to wear.

Emma finds an article on Feminist bloggers, who they represent and what value they actually are to the Feminist movement at large.

Muse at Me-ander rants about how people treat her as opposed to how they treat her husband.

Debbie and Laurie have discovered a brand new species of Strawfeminist! The Attention Stealer.

And finally, "My Head's Not Worth Stink" from Dementia Blues, which was among the first submissions. Ragnell notes that she intended to include it, but didn't notice the date until today. Because it was her own mistake, she's including the older post anyway.

There is plenty more reading at the Third Radical Women of Color Carnival, up at Blac(k)ademic right now.

And that's that. Ragnell would like me to thank everyone who submitted, and everyone for visiting, and to inform you that the next Carnival will be on I See Invisible People on April 19. Terry has the info up here.

I'm very happy to have had the opportunity to do this, and to see all of the submissions from the various blogs. I really wasn't aware of so many. I'm going to stick around and look through some of them (Ragnell should be back to blogging tomorrow), see if there's any advice for a newlyweds.

With much more gratitude than I'd expected,
-- Star Sapphire 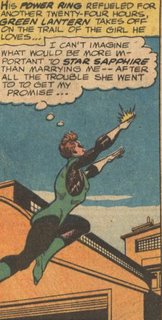