I snatched this off of Poison Ivy's Livejournal and it is a beautiful picture for one compelling reason.

It's not just because all of the men have strategically torn clothing .

No, its because Wonder Woman is standing in the middle of it, costume completely intact. 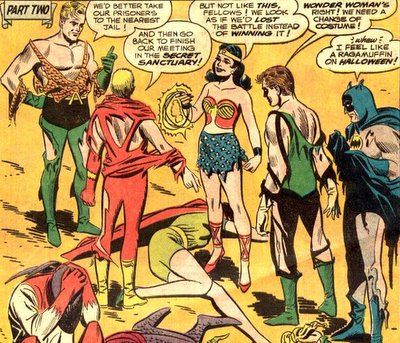 I mean, how long has it been since we've seen a team scene with one female, and four males, and the female is the only one still fully clothed at the end of a fight?

Possibly since this panel was first published.
Posted by Ragnell at 12:17 PM