Amazing What Good Coloring Can Do 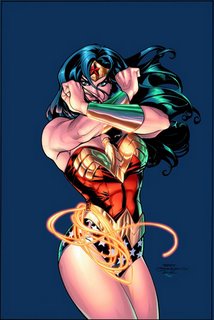 The cover to Wonder Woman #1 as found on Newsarama.

I take back some of the bad stuff I said about Terry Dodson. He can draw a woman with biceps who believably has the Beauty of Aphrodite. That's impressive.

So many artists freak out and remove all trace of organs, showing a little stick-arm figure, and the few who try sometimes go the other direction and lose all proportionality when drawing the figure. It's nice to see definition in her arms.

Unless this is all on the colorist. In which case, I hope the same colorist is on the interiors.

I hope he can manage a distinctive face though. I mean, scenes that feature Diana, Donna and Hippolyta (I refuse to believe she's not coming back) out of costume could be a nightmare telling the three apart.

I wonder if Diana has experiences like this lady describes: "..a significant percentage of men feel absolutely compelled to announce within moments of meeting me whether or not the sight of a muscular female causes them to become sexually aroused."

(Oh, and she'd better be towering over the rest of the Justice League this summer. I'll accept Martian Manhunter looking her in the eye, but Batman had better be craning his neck.)
Posted by Ragnell at 3:48 AM