I'm still complaining about this one.

Even today, I can't get over the number of people who want to see Wonder Woman end up with Superman or Batman. I mean, I can handle a little flirting, a story with a date now and then, but I think that pushing either one as the major romance in her life minimizes Wonder Woman as an independent character. It reduces her to a prize for one of the DCU's great Alpha Males, and hurts her standing as a franchise. She becomes an accessory to one of them.

So it really irks me, not just to see so many fans who love this, but to see how often it seeps into the comics and their media tie-ins. In particular, it pisses me off when it becomes a focus in her own book, as her crush on Superman in the Perez run or even Rucka pulling that shit with Batman in Blackest Night: Wonder Woman. She is her own character, she deserves her own love interest but writers can't seem to get them to stick.

And this is DC's fault, because they aged and married off the guy who was meant to be her Lois Lane. Rather than rehabilitate him like they did Lois, and modernize him for the new era it seems they decided just not to use him anymore. The logic was that it was sexist for her to fall for the first man she ever saw. So they made the first man she ever saw into a fatherly mentor, and decided it would be better if her first romantic interest in a man was to be attracted to Superman. Because being attracted to a man that DC will never allow her to outshine is somehow less sexist than the original dynamic of her being attracted to a normal man who is equally turned on by her saving his ass all the time. 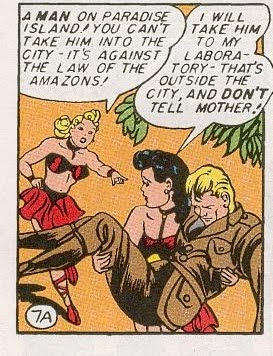 It's the dumbest thing they did when they rebooted Wonder Woman, and potentially the dumbest thing they've done in her history. (Even when they killed him off it was better because he had still existed, and they could always bring him back.) They simply haven't been able to recover. Every love interest they've introduced (Micah, Michael, Rama, Trevor, Io, Nemesis) that survives the writer who introduced them gets ignored by the next writer. None of them seem to take. In the meantime, tons of fans argue over whether Batman or Superman suit her better because so few people have seen that she was originally created with a love interest as part of her supporting cast.

Honestly, if they can get anything out of this Flashpoint and JMS reboot shit, it should be that they can bring back Steve Trevor revamped to suit her modern trappings, as a viable love interest. He lasted 45 years, after all. No one else can seem to stick around beyond the next writer.
Posted by Ragnell at 1:01 PM