He has no right to look this good.

I'd briefly considered ordering the Age of X: Alpha book this week simply because the Magneto costume design is so beautiful looking, and I am a sucker for Magneto. Still, the initial marketing campaign was very off-putting so instead O decided to slot that money towards a Chaykin-written Magneto one-shot. It is currently in the mail, but in the meantime @#$% Yeah Magneto has started posted some of the artwork and already I'm feeling good about my purchase. Check out this splash: 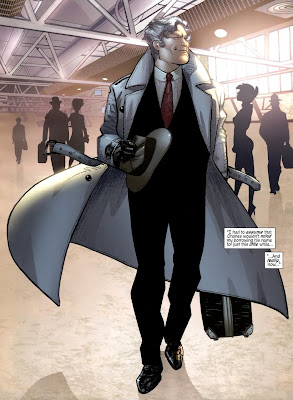 That is Magneto rocking the suit and trenchcoat look after he clears customs with a stolen identity. I'm told this is set when he first gets to the US, after the falling out with Xavier. Now, if I remember my X-men timing properly means that right now Xavier is scoping out Scott so it's within the past fifteen years. Magneto was a teenager in WWII, so he's coming up on 90 right now. That gorgeous man in that picture is around 75 years old.

Not only that, there's panels of him on a date with a much younger woman. I like this, because I'm particularly enamored of Magneto in a romantic setting. My reasons for this are complicated, though.

You know those terrible romance novels where there's an infamous bad guy who is a perfect gentleman to the heroine, so she falls for him? Not really the bodice rippers, mind you, but one of those where the guy treats her like fine porcelain but engages in violent behavior against every other character. It's this weird safe fantasy in love stories where the heroine is special enough that she is immune to the man's violent tendencies or he's somehow redeemed because sexism/chivalry keeps him from acting violently towards a woman.

Magneto romance stories use that setup, but his history acknowledges how completely removed from reality this feeling of safety is. Yeah, there's people like Rogue that he ended it with a bittersweet parting (I remember one where he told his life story in pillow talk to some girl he picked up on the beach and far as I know he just left, betcha this girl in this one-shot ends up okay too) but this guy has had some very bad breakups. Magda wisely realized that someone with that much power who is prone to paranoia and fits of rage is bound to lose it and hurt a loved one (like, y'know, their son) so she left. She leaves the children because she expects him to be so mad he'll kill her and take them. It's heavily implied that Lorna's mother was killed in a plane crash caused by Magneto. He attacks Astra on sight. Hell, even that bromance he had with Xavier ended on a really sour note.

And because they've done this, they've established that he is a bad guy who does bad things even to people he loves, they have a lot of flexibility when it comes to Magneto stories. They can explore his soft side and humanize him without erasing or trivializing his violent side because Magneto is such a huge, established and well-known villain that there's no point in trying to explain away his past or sweep it under the rug. It's there, and the writer has to accept that this is Magneto and he's been a pretty awful person. In the meantime, he's had enough softening and humanizing stories by this point that they don't come off as weird or insincere. Sure Vision and the Scarlet Witch #4 was probably weird when it first came out, but by now we all know just how complex this guy is. He can be the grand world-threatening villain without losing our sympathy, and he can be the melancholy, remorseful father without losing his threatening presence.

Ultimately, this what makes him such a compelling villain. His origin and subsequent actions, all of the alternate universes where he's a good guy, all the side-switching, his love life and his attitude towards his children all mean he has our sympathy. Not only that, we can relate to him. We can see ourselves in the shoes of this guy who just randomly has all of this power and ability but has given into his rage and pessimism to end up being exactly the kind of person who caused all of his pain. We can see him as a cautionary tale, someone to pity, someone to root for and someone to fear.

And we can look at a splash page like that, of him full of hope and cheer having stolen his friend's identity and illegally entered the country, and know that he's going to become a major supervillain but still smile at how happy and roguish he is, and how great he looks in the suit.
Posted by Ragnell at 4:04 PM