As long as I'm wishing for things...

I've realized recently that if Marvel were to write a comic just for me it would be an ongoing series starring Magneto and focusing on how he relates to his family. You could set stories where he's a good guy and a bad guy, because he certainly switches, is horrifying or sympathetic, and where he fights the X-men or helps them, but the main draw for me would be a promise of seeing the family ("the family" is to be referred to with Ron Howard's voice because I've watched too much Arrested Development). ALL of his children and grandchildren (even Luna now that she's got funky mind powers) qualify as super-heroes, and he is a Big Time super-villain. If you do not find that interesting, I don't understand you.

Right now in Children's Crusade, the main thing that keeps me picking it up (other than desperate hope that Wanda will do something) is watching Tommy, Pietro, and Magneto all try to out-smartass each other. (Billy and Wanda should join in once they've finished laying out the exposition.) 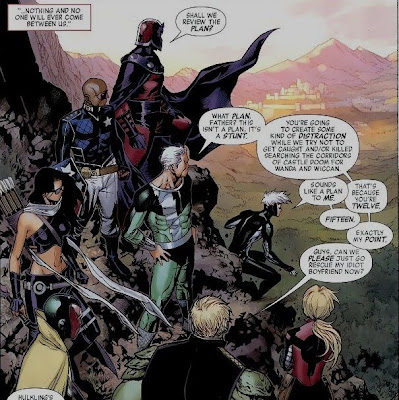 Marvel could easily pick this up after this series ends, and we'll have two sets of twins plus Grandpa. You already have some serious dramatic potential there, with the two sets of twins trying to become a full family again, and Magneto trying to be an X-man still. While he's trying to do the hero thing, he's also trying to rebuild those bridges now that he's got a couple of stepping stones put down again.

Bring Lorna back from space with the boyfriend, and you have another set of characters to enfold into the family. Polaris and Magneto is already a compelling interaction, Polaris plus the twins (and new twins) after House of M is so fascinating to me that I can't understand why Marvel wants to let this lie.

And while Magneto would be the central character, this would be an excuse to showcase how the family interacts with each other. We could get my Pietro-Lorna teamup here, Wanda and Lorna doing sister stuff (and fighting evil), Wanda and her children, Lorna and her niece and nephews...etc...

Along the way, natural storylines would bring in Crystal and Luna, Hulkling, the Kaplan family, the Shepherd family, Rogue and Professor X for an issue or a few arcs. Tommy could get a little robot girlfriend. Magneto could try to manipulate Pietro into dating a human or mutant woman. (I think he'd leave Wanda alone since even down to the basic "I make bad things happen" power she's not someone wise to mess with, and she's already had two mutant children.) Ideally they'd find excuses to bring back the old Vision (not the dumb emotionless one, or the admittedly nice baby one, but the Vision who married Wanda), Astra, Joseph, and--for me the Holy Grail of potential Magneto stories--Magda.

Marvel, I promise you that unless you put an absolutely DIRE creative team on it I would buy the hell out of this.
Posted by Ragnell at 3:35 PM