This Could Get Ugly

A recent disagreement has inspired me to resurrect an old feature. 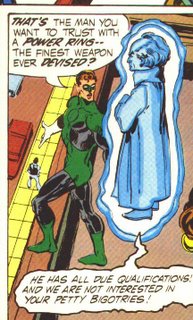 Yes, there's analysis...Hal Jordan, love of my life (next to John Stewart, Sherlock Holmes, Sir Gawain and the guy who drew this panel), has been watching the commotion recorded here, here, here, and here. He's been watching from a bove.

Now that the situation's been resolved, Hal turns to his companion, the icy and removed Guardian, and complains. Look at the wording.

"That's the man you want to trust with a power ring -- the finest weapon every devised?"
"He has all due qualifications! And we are not interested in your petty bigotries!"

l've gotten some flak for describing Hal as racist, but my accusations are not unfounded.

Hal's definitely an elitist. In the whole series, he's put up as the conservative, the one who supports the establishment while Green Arrow wants to shake things up. It makes sense. Green Arrow's a self-made hero, Hal's a chosen hero. Everything about Hal is elitist. He was a test pilot, known for being the best. His girlfriend was none other than his boss (his former boss's daughter), the highest profile woman in the company. Green Lanterns are specifically picked for their job based on personal qualities. Picked by being the bravest and the most honest available.

It's obvious he doesn't think John's good enough for the job.

It's not John's attitude, or he would have worded his objection differently. He wouldn't have added "finest weapon ever devised." He would have, if worried about misuse, said "most powerful" or "most versatile." But he said finest, emphasizing his elitism.

The art supports this. Hal's watching from above, a rooftop. He's perched in such a way that he's removed form the situation, but not from the reality. He's watching it, how it doesn't affect him. Nothing in the situation on John inside is anything he understands. Nor does he understand the "good cop" in this mess. He just sees the authority figure he's going to have to be, and placing himself in that figure's place. Nevermind that that figure was in the wrong, behaving in a clearly unjust way Hal wouldn't. Most likely in the situation below, we'd have seen Hal step in and tell the cop he was overstepping his bounds. But Hal's not putting himself in John's shoes, he wouldn't think to. He's first and foremost putting himself in the "bad cop's" shoes because that's the person in the situation he identifies with.

Since this is 1972 Green Lantern/Green Arrow, written by Denny O'Neill, drawn by Neal Adams, we know for a fact we're in for a social commentary, and in this panel it's obvious. Hal's allegorical, he's the power structure in society. John's the normal one. He's the everyday citizen. Hal's white, John's black. Hal standing so far above John, passing judgement from the viewpoint of the authority figure, shows the racial divide between blacks and whites. It's the Seventies. Hal, the white elitist is appealing to the Guardian, the highest authority, to keep John, the black achiever, out of his restricted, elitist club. And the Guardian says "No. He's qualified. Deal with it."

And once again, before you come after me for reading too much politics into it, I remind you, this is 1972 Green Lantern/Green Arrow. They did it on purpose.

This panel also convinces me that I'm not imagining the yellow thing. There it is again, John Stewart surrounded by yellow. Only, instead of encompassing the background, the sidewalk (previously brown) is yellow. Hal's weakness, yellow. A barrier between the two characters. A color associated with fear, anticipating difficulties when it comes time to train?

John has all the qualifications. Hell, he's arguably the only Lantern who was hand-picked by a Guardian (Guy was chosen when Hal was, and activated during ColE by the Guardians, and Kyle, if not actually random, was one of a limited set of choices for Ganthet). He's one of the elite choices that belong in Hal's club. Hal should accept him unquestioningly like he accepted Katma and Guy (this was prior to Guy's brain damage), but Hal disagrees.

Most of the colors in this panel -- reds, yellows, greens, browns -- are earth tones. Except for the Guardian, white and bright blue. The Guardian has the true bird's eye view of the situation, he has the real objectivity here. He's not a part of the scene, he's observing it. He doesn't even touch the ground.

It's notable that a Guardian is a high-level telepath, and Hal is an open book to him. (You could argue there's no indication of telepathy made, but seriously, when have the Guardians telegraphed when they were mindreading before? It's always been automatic insights, never untrue) When he says "petty bigotries" he's not making it up. He's throwing something in Hal's face that Hal's trying to bury. There are other possible reasons Hal could have for disagreeing with the choice, but the Guardian immediately puts it off as petty bigotry.

I suppose so, since in the next panel (which overlaps this one slightly, note the few locks of hair on the side) Hal cites John's "chip on his shoulder the size of the rock of Gibraltar" as the reason he was giving the Guardian such an attitude about his personal choice. Yes, Hal was defending his own insubordination of saying John was not fit for the Corps by saying John was insubordinate and therefore not fit for the Corps.

Please direct your "Green Lantern was not a racist comments" below.
Posted by Ragnell at 7:57 AM