First Comics Week: The Twisted Mind of a Twelve-Year-Old Girl.

(With Apologies to The Invincible Super-Blog! as I can't stop myself from wandering into his style for this one.)

When Chris Holly declared it First Comics Week, naturally the first thing I thought of was the comic that brought me to DC -- "The Return of Barry Allen."

But there was an earlier one. I didn't think of it until a few hours later, but once I did I remembered vividly the opening scene. I remembered having watched the X-Men cartoon. My sister reading the comics, her endless nagging, picking up a book because it featured kids close to my age, a blonde jogger, a girl on a park bench, and a panel which downright blew my mind!

Unfortunately, the comic belonged to my sister. In Pennsylvania. And I wanted to reread it before I posted about it. I spent the next few lunchbreakss at local stores, and yesterday I found it. There it was in the dollar-bin, with it's pretty, shiny silver cover. Generation X #1

My childhood for ninety-nine cents. What a bargain!

I was nervous when I brought it home. My hands were trembling as I fumbled with the polybag. What if I was suffering from... Nostalgiavision? Would it live up to my memories? What if it sucked? What if now, that I've trained myself to notice the symbolism, it completely and utterly insults the hell out of me? What if this means that I can never, ever return to Marvel, even after Joe Quesada retires? I nearly chickened out.

But no, I opened the bag, I read the book, and I learned a valuable lesson.

I worry too damned much.

It was a transcendental experience. I became as a child when I realized that I have still not recovered from my first reading of this comic -- 12 years ago! Merely rereading this comic caused me to abandon all pretenses of reason and reflection. I regressed to the mental state of a babbling twelve year old fumbling for words to describe the beauty, power, and wonder of what she had just read. My vocabulary dissolved, the adjectives were slipping away from me and the only way I could describe the book was to say that it was totally awesome!

This is the way team books should be done.

The first panel features the orange sun, low in the sky in the early morning. The narrative captions (third person, baby!!) describe the Dawn. The first character introduced is running. Not away from anything, towards us, towards the reader. The narrative describes her as Paige Guthrie, a mutant. And her thought balloons (thought balloons!) Her head and feet extend outside the panel boards. The panel cannot contain her power!

This overtaking the panel trick is done for every character introduction in the book except Jubilee (who gets a full page). It's always full body shots, a good way to show off a character. And the poses fit the personalities of the characters. Paige is running forward. Jubilee's sitting on a park bench in monster slippers and whining about being up too early. Monet descends from above, correcting the other character's vocabulary.

Oh Monet, how I adored Monet in this! I think it's because she struck me as a black female Superman. Look at her first appearance. Perfect Superman pose -- red and blue clothing, arms outstreatched, palms open, one foot is kicking back so fast we can't see it, the other extended forward to land on Earth, the sun glints off her spandex and her hair sweeps back in a very capelike manner. She completely comes across as Supermanesque despite being a total snob. Hell, it adds to her. She'd be so flat as a outwardly sweet person. I still think Marvel should play her up as their answer to Superman. It would work. I would completely do that if I were Marvel's Editor-in-Chief.

Later on in the book, she's climbing a tree. In a preview profile, it notes that she describes boys as "icky" and later on in the series she's caught with a coloring book. So yes, this was hint-dropping for a future plot (her baby sister was impersonating her or something stupid -- I'd stopped reading after Age of Apocalypse was done), but I liked it. I wish that childishness would come back as a side effect of her super-intelligence. It softened an otherwise harsh character.

Later on, they introduce some of the boys. The only one I cared for was Synch because he was a copycat power, and if I were in the Marvel Universe that is what kind of mutant power I would want -- the power to have everyone else's power. But the White Queen makes a strong first appearance, setting herself up to gain my eternal fanitude a few issues later.

Once everyone is introduced, they all go to an airport and have the obligatory coincidental run-in with a supervillain -- a supervillain a teammember knows! Monet knows Emplate, who is there after Chamber, because from this point on, in this and every comic he appears in -- Chamber is the center of the known universe. He has that much power.

And of course, at the end, a mystery teammember is introduced. A teammember who leads into the next issue and ties importantly into future plotlines -- many of which I never saw resolved, because this, after all, is an X-Men comic and nothing every gets resolved.

All in all I have to say (and I am biased!) that this is the strongest first issue of a team-book I've ever seen. I hadn't read the crossover that led to the team, and I didn't have to. I only knew Jubilee (from the cartoons) but I got a very clear impression of the other major personalities in this issue. The team was built in a wonderfully 90s manner -- half male, half female, with a carefully thought-out ethnic diversity. Which was beautiful because this way, when the team was portrayed out of costume, you could tell them apart! If only Young Justice had considered that when they brought in female characters!

None of this occurred to my twelve-year-old brain initially. It helped that the characters were close to my age, and it helped that the strongest personalities were female, but to tell the truth I was hooked from one panel.

You see, as a child, I was fascinated by snakes. Whenever we visited a zoo or saw an animal handler show or any of that neat stuff they do for schoolkids to get them interested in science, I was drawn to the snake. If I could pet the snake, I would. If I could see a snake, I'd be peering in the aquarium dealy. I asked my mother for a snake several times (she hated them). Everytime I had the opportunity to get my hands on a discarded snakeskin (which, alas, was all-too rare), I took it and I saved it until my ophidiophobic mother tossed it and made "eww" noises. My favorite person in Greek Legend? Medusa.

This was all because I found the idea of an animal that could shed its own skin absolutely fascinating. 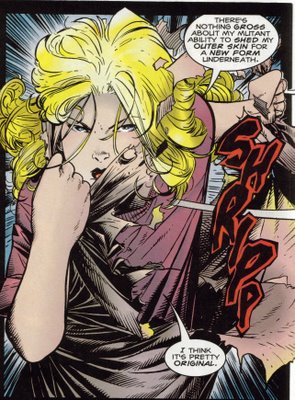 Yes, Ladies and Gentlemen, that was a girl ripping her own skin from her body.

Please Note: All references to Chuck Austen are expressly forbidden in the commentary. It Never Happened.
Posted by Ragnell at 3:30 AM