They've released the cover for the John and Guy book. Look at all the Lanterns who made it through the reboot: 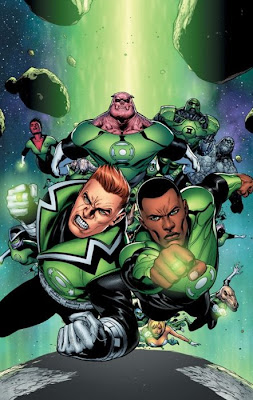 And I can't remember all the names for the guys on Kyle's new team but I've narrowed down everyone but the Star Sapphire. (Because the Star Sapphires all conveniently look alike in silhouette.)

Spiraling from Kyle in the center, we have the reptilian yellow lantern who fought Kilowog in Sinestro Corps War climax (Akrillo, thank you!), Bleez (thankfully, she avoids being drawn by Ed Benes), the Indigo Lantern who showed up on Oa during Blackest Night, Glomulus the orange lantern, a Star Sapphire and Saint Walker.
The Star Sapphire silhouette does not look like Miri, unless her redesign has really lengthened her hair and changed her headdress. Because Kyle is the sort of person who puts together a team of people he knows and trusts, Miri would be his most likely pick. Second most likely? Actually Fatality, since he knows her and can predict her and is kind of a sucker. That would also make the best drama. Then Carol, based on Hal's recommendation.
It doesn't look like Miri, and I don't think Johns is giving up Carol Ferris to Tony Bedard. Silhouette-wise, that character looks like Dela Pharon (the blonde version) to me. But again, all of the Star Sapphires are nearly impossible to tell apart in silhouette. If I wanted the most volatile team possible? Fatality, so she's probably the one there.
Either way, this book just went up on my want list from this image alone.
Posted by Ragnell at 10:20 PM

Labels: green lantern, The Hype Death of the DC Universe