I still say that Guardian was right about Hal.

The Green Lantern movie has stirred up a number of old issues in the fandom. I've been avoiding these, of course, but even I have run across the disdain for John Stewart shown by those who can't be bothered to pick up anything prior to Rebirth. (Philistines!)

This naturally has put me back in a defensive mode for my darling John, and had me rereading old books to put together a recommendation list. As I believe a strong first appearance is the foundation of any decent character, the first place I went to was "Beware My Power", the backup story in Green Lantern #87 that introduced John. (It's reprinted in the second Green Lantern/Green Arrow trade and has the distinct honor of being one of the few collected in Green Lantern: The Greatest Stories Ever Told that deserves the title.)

And that's where I got myself into trouble, because I found myself staring at that first page with John again.

Longtime readers will recall my extraordinary affection for this first page John appears on. It's a masterful set up of the character traits that will put Hal and John at odds in this story.

The first page of John actually establishes quite a bit about his character and the upcoming conflict with Hal. John first shows up confronting a possibly crooked cop. The cop's harassing a couple of domino players on the sidewalk, and John actually walks up behind the police officer, touches his shoulder, and tells him they aren't really bothering anyone. The cop threatens him with the nightstick, and John holds his ground.

On the rooftop above, Hal and a Guardian watch. John is being hand-picked by the Guardians as Hal's new backup now that Guy is on the injured list. Hal argues with the Guardian that John shouldn't be trusted with a power ring.

It's a very simple panel, and follows the Guardian chastising Hal for racism. Once again, I remind you that the Guardians of Oa are telepathic, so there's some basis for this accusation. I added back then that Hal's defensiveness supported that. 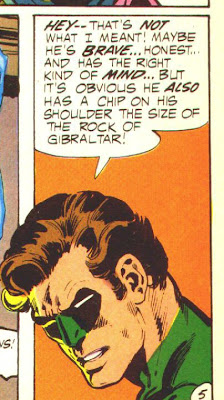 Hal continues to question the Guardian's wisdom by pointing out that John questioning the policeman's wisdom means he has a chip on his shoulder.

Anyway, in addition to a sudden desire to actually finish out the page on this feature, I just wanted to point out the angle of Hal's head. His head is bowed so much at the moment that he's reaching into the next panel. He was leaning back before. The Guardian hit a nerve, and Hal realizes his own hypocrisy as he's stating it.

So he's bowing his head and acquiescing to the Guardian's wishes even as he voices his final concerns. Look at his eyes and his posture. He's wincing. He knows he doesn't have a leg to stand on, that in fact a guy who'd back off from a bullying policeman wouldn't be qualified at all. He knows that he'd probably butt in too, and that his friend Ollie would butt in and shake his finger in the cop's face while calling him a Nazi. (To be fair, I sure as hell wouldn't give Ollie a power ring but Hal should have a bit of perspective on John after dealing with the blonde idiot for so many issues.)

Not only that, my old commenter Steven points out that he's shaded in yellow by some odd chance. He goes on to make a yellow space-bug joke, but he's right that it "literally puts Hal's disingenuous response in an off-putting light." Likelier than not that's a coloring mistake, but it's a pretty cool one and supports the effect of the panel.

I love Hal, and I especially love him in the O'Neil run where he's a flawed human being learning to open his mind to the rest of humanity for the first time. Part of this story is about Hal overcoming prejudice, and it's right there in those last two panels on that page.
Posted by Ragnell at 11:16 PM