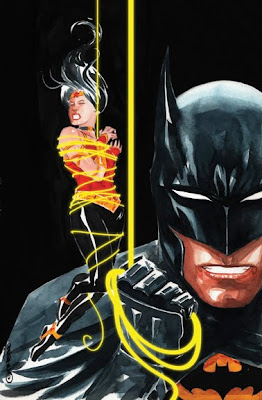 I'm not particularly angered by this. Don't get me wrong, I don't like it, but I'm long past outrage in this category. There's a long tradition of covers where Diana or another character is tied up with the lasso, that's just the nature of a story where the main character uses a lasso as a weapon.

And, of course, there's the infamous "bondage theme".

So I'm going in here today, and possibly in the next few posts, and I'm going to say flat out that acknowledging a sexual element does not mean the same as reducing everything to sex, that acknowledging sexuality in a female character does not mean that the character is intended solely for the male gaze, and that if you respond to any of my posts with anything along the lines of "hruh, hruh, bondage means she's there to get tied up" couched in pseudointellectualism I'm going to save myself the time and right now call you a shallow, posturing idiot and unworthy of my time. That will be why you don't get a response from me.

Now that that's out of the way, yes there was tying up of people and all sorts of giggly subtext in Wonder Woman. Yes, there was a sexual element--her freaking patroness is Aphrodite--and it was part of the fun. And yes, I think it is absolutely absurd that a follower of Aphrodite who started out with such a bright and playful subtext back in the 40s is consigned to Eternal Virginity in the modern era.

Here's the thing, much as we see Diana in perilous situations where she gets tied up, if you wait a couple panels she always ALWAYS breaks free. It was a not-so-subtle commentary on women in society, how they allow themselves to be restrained and restricted by men. Wonder Woman breaking free of her enemies was symbolic of women finding their strength and breaking free of patriarchal rule. Every misstep, every capture, every humiliating and titillating position was to reinforce that, which is why it always ended with her breaking free before she or her friends got hurt.

And every time I see some moron argue that bondage covers are a tradition and were just there as a sneaky-sexy to sell a female character, I want to scream at everyone: THE BONDAGE IS A GIANT METAPHOR FOR WOMEN'S RIGHTS, YOU GAPING SIMPLISTIC MORONS. IT IS NOT JUST THERE FOR YOU TO WANK OFF ON.

That is, of course, not to say that you can't wank off on it... That's your business and yes, there is an element of sexuality to be found in many stories (about everything, not just Wonder Woman and not just superheroes). I'm saying if you do, keep it to yourself and don't insist that we all see that as the end-all-be-all to it, or that greater themes should be sacrificed in the service of sexualization. Fetish material is not the foundation, the point, or all there is to Wonder Woman.

In the DCWKA thread, someone said that cover looked like something Marston would've submitted, and while I initially agreed I'm going have to take that back. It looks considerably more humiliating and mean-spirited than anything from the Golden Age. Danger and restraint in a Marston story served to set up the triumph at the end and there was a hint of that optimism in the Peters art.

Of course, I may just look unkindly upon it because there are other elements to the stories and covers of the Golden Age that we'd be guaranteed if we saw Wonder Woman tied up with her own lasso. Elements that would drive home the true theme. We'd have Diana breaking free of the trap, through her own wits and strength. We'd have a group of women who are oppressed by the villain, and we would know that Diana would inspire them to join forces and overtake the villain. And we'd have the main male character in the story trapped and humiliated right along with her, to show that men are oppressed by the same worldview that constrains women. (Key point here: He doesn't free her, she frees him.)

As Generation Lost is a Judd Winick story, I expect to see none of that in this book. And there's no power and joy in this image of Diana here.