The Not So Many Loves of Wonder Woman: Aquaman

I never really got into Wonder Woman until Morrison's JLA (fortunately, the old TV series was in reruns on the scifi channel so I didn't have to just settle for the Byrne issues at the time) so the first love interest I ever saw for her was... 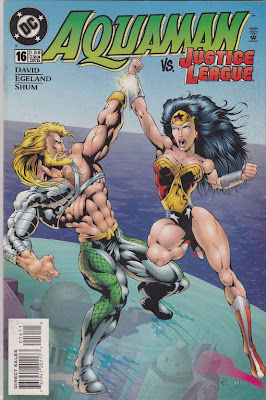 Honestly, I'm one of Those Fans who only found Aquaman stomachable during the 90s when he ran around barechested and bearded with a hook hand. I think part of it was his role on the JLA, though. He was this grumpy anti-social complainer surrounded by optimists. Even though he was completely out of his watery element in most stories, he seemed to fit, seemed to serve a purpose.

And I did enjoy the little ongoing plot with Wonder Woman, where the two seemed to be old friends but he was secretly attracted to her. It had a few things going for it. One, it gave Aquaman a reason to be cranky but still come along. Two, it was the only dynamic like that: Morrison didn't really develop sexual tension between Diana and Superman or Batman, and while he had Flash and Green Lantern discuss how attractive she was they never really fixated on it. Three, it was almost completely one-sided.

I liked it because it added a bit of character to Aquaman but had no chance of going anywhere. Diana didn't seem to think of him that way, and his own storyline wasn't open to pursue this. He spent time suppressing his attraction to her and she rolled her eyes at him and told him to stop being such a pompous all the time. It was a touch of melodrama in the background of an action-driven series.

Of course, Diana's had a lot of admirers like this, where she's the love interest for some curmudgeonly dude who won't get anywhere with her for various reasons. It was the first one I ever saw, though.

It was also the first time I ever saw a scene where I thought "That simply doesn't work." That was in the Mark Waid storyline with the Queen of Fables. 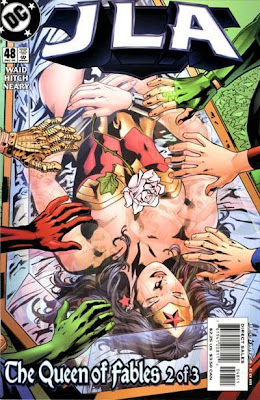 There's a scene where Diana is discovered to be asleep, Snow White-style, and Wally and Kyle are standing over her trying to figure out who should kiss her. Aquaman steps up, pushes them aside and tells them it's a job for a prince. Then, in a lovely splash page, he kisses Diana.

It's meant to be one of those great moments, those little bits that justify Aquaman being on the league and drive home his personality but... it seemed wrong. 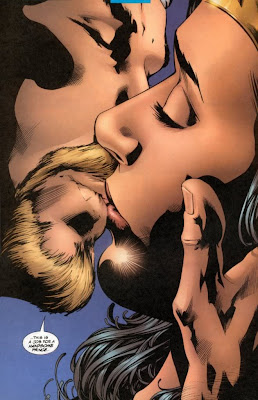 Really, it's the exact same wrongness that makes the Queen of Fables a great villain for Wonder Woman. This villain thinks Diana is Snow White, and Diana is as far from Snow White as possible. Yes, black-haired white princess known for being the "Fairest in the land", but in a narrative role? Diana's not a princess who is tied to the kingdom and rescued. She isn't someone who is the daughter out on a specific quest to end a curse. Diana is the character who leaves home to seek fame and fortune. She's supposed to find love, her destiny, and make a name for herself before she returns home to take the throne.

Yes, Diana is a princess who's a superhero, I cannot emphasize this sort of girl appeal enough. But in a fairy tale character role? Diana's not the princess in this setup. Diana's role is that of the prince.

Wonder Woman doesn't get kissed by to life. Wonder Woman is the one who kisses the cursed character back to life.

And I enjoyed the storyline, and I like the villain who caused it, but that moment did change something for me. I didn't like Aquaman and Wonder Woman sexual tension anymore. His "stepping up to the plate" moment really suited his character but just jarred with Wonder Woman's natural place in the narrative. It broke the entire dynamic for me. It just seemed wrong.

I think, actually, it would have seemed less wrong with Wally or Kyle because neither had the same tension prior. Wally or Kyle would have just been "Oh man, I hope this works" with some teasing from Diana after. With Aquaman, it was this opportunity he'd wished for the entire series. The chance to swoop in and be Diana's Prince. It was basically his shot at being a man and winning her, and really Diana isn't a character you "Win" by being a traditional male hero who saves the girl. It would be disservice to her if that were to work. Fortunately, I think the editors and writers who thought this would be cool looked at that and went "Yeah... let's try Wonder Woman and Batman instead."
Posted by Ragnell at 11:41 PM