A Pitiful Pool of Prospective Paramours

Steve Trevor wasn't the only Silver Age love interest, but he was honestly--even in 1958 when they actually let him almost outsmart her--the most likable. Our other options were usually villains or...

He's Diana's teen romance from when he was Mer-Boy. He used to try to protect her underwater and she would save his ass. He used to fight with Bird-boy over her. He used to follow the dumbass advice of dumbass Mermaids about how girls were all alike and fuck up courting her because Amazons are immune to that shit. Of course since Wonder Girl became Donna Troy, I guess the Mer-Boy and Bird-boy fighting over her experience went to Donna. Maybe? And I think post-Crisis they've all been replaced by Aquaman, but I'm not sure.

What I am sure of is that I fucking hate Mer-man. Mer-man's sole purpose is to create a Lana Lang-style love triangle and have them fight over Wonder Woman like a prize. (The lead story in issue 125 is actually called "Wonder Woman--Battle Prize") He also tries to rush in and save her from situations she's perfectly capable of handling herself. I'll give you that Steve does this too, but he seems a lot more inclined to sit back and just keep within eyesight. Mer-man actually tells her not to do things like he knows better. Then he gets his ass saved by her. 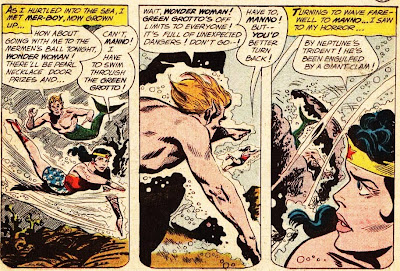 Really, just take all of Steve's Silver Age Rough-Around-the-Edges Macho Flaws and multiply them by 10. That is Mer-man.

And when Steve encounters Mer-man, take his competitive pigheadedness and watch it multiply all of HIS flaws by 10.

Then add pissed off Hippolyta telling them they're a bunch of idiots. 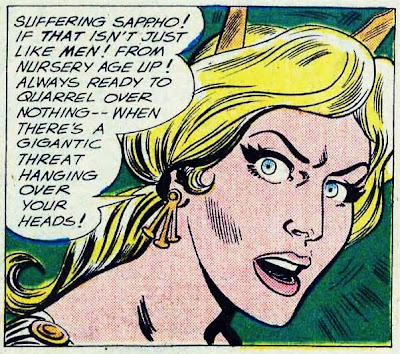 Mer-man does suffer from a problem Steve doesn't, which is that he doesn't appear often enough for there to be many stories to offset when he acts like a jackass. Steve can be a pushy jerk because he's around next story being loyal and supportive, and telling her how awesome she is and that she always saves his life. We get to see Steve remember that Wonder Woman is more capable than him often enough that it actually seems endearing when he tosses himself into danger to help her. Mer-man... just acts like an asshole, and seems to not ever remember that she is considerably more powerful than he is. 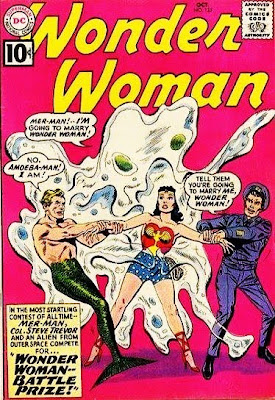 Really, because of this pigheaded arrogance the competition stories have the option of being very funny. For example, in #125 Mer-man (without asking) grabs Diana and (without asking) jumps into the ocean to show off underwater because he has the advantage there. Steve gets annoyed and follows. Diana watches Mer-man fight a swordfish, then sees Steve is losing oxygen and consciousness looking for her and rescues him. Mer-man follows them to land where Steve beats up a gorilla, and Mer-man gets captured by a giant bird. Diana saves his ass. That's... actually pretty funny.

Except at the end of the story (and all of these stupid competition stories with Steve and Mer-man or Mer-Boy and Bird-brainboy) she doesn't tell them they're idiots and send them packing. She tells them she likes them both, and then looks at the audience and asks how she could possibly choose between the two. Which is bullshit. They both suck in these stories.

"How can I choose?" Don't. Send them both packing, then go to the Superman franchise and ask Lois out. Maybe you'll hit it off and give Clark a break from this sort of shit too. At the very least you'll get a nice meal and some entertaining company while Steve follows you around with his adorable pilot's hat in his hand begging you to talk to him again.
Posted by Ragnell at 10:37 PM