I can't even have an action figure.

I ordered a set of toys. I wanted the DC Animated Universe Kyle Rayner, who came in a set that included an animated-style Katma Tui (which you all know I wanted the second I realized it existed) and an Arkkis Chummuck. I got the set in the mail and opened them to find that there was a small clear plastic stand with a peg and the DC logo imprinted on it.

Interestingly enough, my John Stewart, Kilowog, and Tomar Re set had not come with a stand at all.

Figuring the major character was the one to be displayed, I flipped Kyle over and looked at his feet. Neither left nor right had a hole for the display stand's peg. I picked up Arkkis, a character I never had much interest in, because he was closer and checked his feet. No hole. I found the hole in Katma's right foot.

It seems that the manufacturer (whatever mysterious division of Mattel and/or DC Comics is in charge of fucking up the female action figures, I don't keep track of such matters) felt that the only toy that needed help standing was Katma. So I tried and sure enough the only toy that will not stand on its own is Katma Tui.

Can anyone hazard a guess why that is? 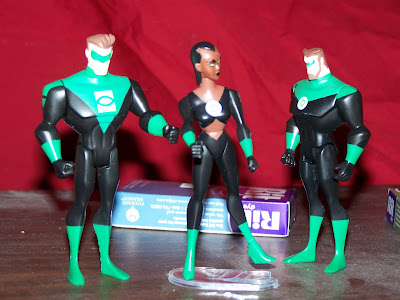 I suppose I wouldn't mind the high-heeled action figures if they could find a way to make them stand up with the high heels. But look there! They even filled in the plastic between the heel and the ball of the foot, and she still doesn't stand on her own. They know the toy can't stand with feet like that. That's why the stand is there. They prepared for the toy not to stand like that. But they didn't fix the design of the toy so that it doesn't need a fucking stand!

Would it fucking kill them to give her flat feet? What's the harm in giving a female action figure sensible boots? Wasn't in the original costume design? Its a toy, for fuck's sake! Its not like you're using a sharpie to put eyebrows on the Mona Lisa here. This is something to play with. Adding a little practicality would be a plus in this department.

Maybe this is not all in the heels. Maybe there's a way to redesign the body so she's poseable and has the high heels. You might have to make less spiky heels, thicker feet and legs, less of an hourglass figure, and an overall sturdier figure but it can be done.

But no, its more important that she look all pretty and feminine than be able to fucking stand up!

As it is, I now have to set up a little clay planet for all of them to stand in if I want to make a scene or a diorama (because that stand doesn't work unless everyone has one).

Oh, and as long as I'm talking about these figures -- why the hell can I make out the line over Kyle's belly-button? That's a strange detail to throw on an animated-style action figure. Was that muscle area visible in the cartoon?
Posted by Ragnell at 10:23 PM