I'm sure everyone was expecting a Steve Trevor post, but really I'm in a Starman mood lately and I always had a soft spot for the Shade and Hope O'Dare as a couple. I like to think that since the series ended they've gotten together and had an adorably creepy little baby girl with shadow powers who will be vexing the Justice Society or the Flash in some future storyline. (Actually, I'd overlook my "no more blonde teenaged girls" policy if such a character were to show up with pale yellow hair.)

It would be living together, at best, I can't see either of them too fond of anything official even in the case of a baby. So why wish a baby on them? Because the idea of shadow powers (not to mention Shade's probable parenting style) introduced into the fanatical law enforcement legacy of the O'Dares makes me giggle.

(And I'd rather never see either of the two characters again than have them established as not romantically linked.)

Anyway, in honor of Valentine's Day, can you top the Shade's original smartass answer to Hope's stupid question? 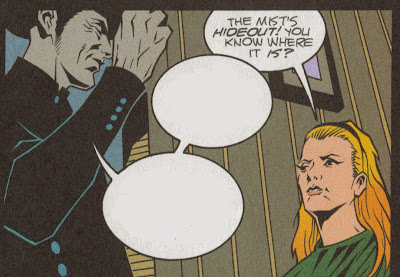