From Greek Gods to Guy Gardner and G'nort

With Perez, it was painful to read his Olympus and Hermes scenes because it seemed like he'd never read up on the gods. I got the distinct impression that he got a fact sheet and a few pages summarizing the notable stories and he went from there because while the structure and framework of the Pantheon was there, the life and the spirit was nowhere to be found.

I'm convinced that's what happened with Howard Chaykin and Beau Smith's Warrior run. Someone must have given Chaykin a list of plot elements and summaries, because the framework of Warrior is there but the spirit sure as hell isn't. I'm willing to accept the narrative condemnation of Guy because its first-person narrative from G'Nort's POV (I mean, since when is G'nort considered "perceptive"?) but even taking that into account doesn't improve on the overall mood of the book. I'm largely unimpressed with this comic and that is really saying something because I had very low expectations to begin with.

Also, that new Rannian Lantern puts the series out of continuity with GLC, which grates on my nerves because GLC has managed to keep with the spirit of Warrior even though it threw the trappings of the series to curb.

On the bright side, there was a G'nort butt-shot. 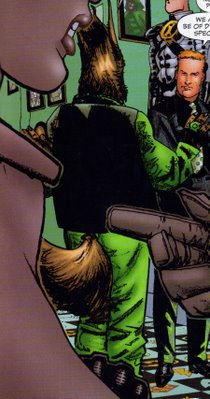 (Annoyingly, that was the only full tailview of G'nort and every other Lantern was turned to the side or the front every panel. Even the female character. The man knows nothing about Green Lantern. Butts, not breasts, dammit!)

Also on the bright side, I spent twenty minutes laughing at the first two pages in which we see "Dark G'nort." That was golden unintentional comedy, funnier than any other G'nort appearance I've ever seen. The scrunched up little face, the badass attitude, the known history, and the fact that this is Dark fucking G'nort combined to save the entire issue for me. I think he should stay this way, it is hilarious.

Those two pages aside, don't waste the six bucks. Buy a few Warrior back issues instead.