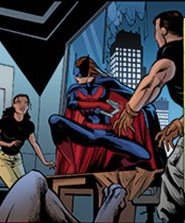 Okay, I've been following this since got home Sunday night, and I have something very important to say to all of you:

DC really isn't making a big deal out of Batwoman being a lesbian.

It's everyone else who is.

Yes, I elaborate.Take the original, two-page, twenty-six paragraph article (which you should register and actually read before going off about).

Here are the Batwoman mentions, quoted for your perusal.

The articles starts with discussing the history comics and what cross-section of society they represented.

But this year will be a banner one for diversity in the $500 million comic book business. At DC Comics, an effort is under way to introduce heroes who are not cut from the usual straight white male supercloth. A mix of new concepts, dusted-off code names and existing characters, the new heroes include Blue Beetle, a Mexican teenager powered by a mystical scarab; Batwoman, a lesbian socialite by night and a crime fighter by later in the night; and the Great Ten, a government-sponsored Chinese team.

(Emphasis mine -- and yours)

Later on, she does get her own paragraph devoted to her -- just as Jaime the new Hispanic Blue Beetle gets his own paragraph

Another effort to link old and new characters centers on Kathy Kane, the gay Batwoman who will appear in costume for the first time in a July issue of "52." Batwoman was introduced in 1956, but she was one of several, often silly additions to the Bat family, including Ace the Bat-Hound (1955), Bat-Mite (1959) and Bat-Girl (1961). In her latest incarnation, Batwoman is a wealthy, buxom lipstick lesbian who has a history with Renee Montoya, an ex-police detective who has a starring role in "52."

Please note that buxom lipstick lesbian is not in quotations. That is because the article writer is an idiot, but not necessarily Batwoman's creator.

Now, to be fair, it was followed immediately by a paragraph on gays in Gotham:

Even so, it's something of a surprise that there are any gay characters hanging out in Gotham City. Last year DC issued a cease-and-desist letter to a New York art gallery for displaying watercolors by Mark Chamberlain that depicted Batman and Robin in intimate positions. "That's not what this is about," Mr. DiDio said. "We're basically showing a different cross section of the world."

And the article wrapped up with an attention-hound writer saying idiotic things.

It also features the infamous costume with the high heels (Damn you, Ross), which is sexist as shit but more of a general misogyny complaint than specifically being objectified for her sexuality.

Almost instantly -- due to the Bat- prefix, the controversy of homosexuality, and mundanes mixing Kathy Kane up with Barbara Gordon -- this was picked up by the Associated press and it makes the rounds through newspapers, message boards, blogs, and watercoolers throughout the world. The New Batwoman is going to be a Lesbian!!!

So, naturally, Dan Didio does an interview in response. Which, not surprisingly, was based on having reconcieved of the decades-dead and erased-from-reality character as a lesbian.

Which naturally caused a lot of DC-bashing because now, suddenly, Batwoman was a lesbian as "Selling point" rather than a smart and unusual way to bring her into the 52 action. You know, 52, the comic in which she debuts? The comic in which Renee Montoya, a lesbian, is a main character? The one where she's coming off of a broken relationship, has a history of being in the closet and have secret lovers, and has recently been going through a bout of promiscuity and anger-issues? Where an easy way to link someone to her plotline might be to have a previous romantic involvement come back on her? 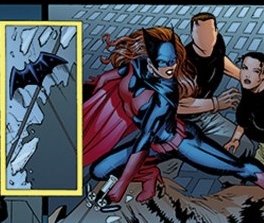 Not so much as case of "Of course the only two lesbians in Gotham know each other!" (a blatantly untrue statement, as neither woman has connections to Holly Robinson, Catwoman II, that I've seen on a number of blogs) as a case of cop's ex-lover is a superhero. Which we've never seen in a heterosexual relationship before, right? (Flash and Julie, Shade and Hope)

But no, we can't treat this as cute romantic awkwardness like we would if it were say, Harvey Bullock being featured in 52 and Batwoman was brought in with romantic complications towards him. Or if Renee were not gay, and a male hero that had a romantic history with her was brought in to complicate the plot. No! Because they're lesbians, so DC is automatically using them to pander to fanboy desires and not to, say, appeal to the large number of gay readers they have.

Here's the thing, I read the interview with Didio. I read the original article. Despite myself, I was intrigued by the story. She sounds pretty cool and interesting, at least from the start. And Didio's "I didn't realize it would be this big as deal" thing may be a lie, but I'm leaning towards truth here. They have other gay characters, have had gay characters for years. Batwoman is a relatively minor character. They were asked to produce a list of diverse characters for a New York Times article on diversity in comics. They gave up their history with Milestone, a Hispanic teenager, and a lesbian socialite. It's not that they're considering gay people a sudden novelty right now. It's that the article was specifically about characters that are not white heterosexuals, like we traditionally see in superhero comic books.

But the more they talk about being diverse, diverse they sound. (Get it, diverse, da verse, the worse.. *Ahem* Nevermind). 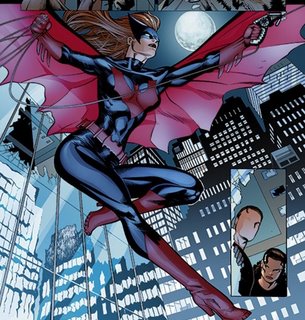 I see both sides condemning the character. The message boards and conservative misogynists are bringing their homophobia to the forefront, and then in response the gay-rights and feminist sites are calling her "Bat-bitch" (Yes, a gendered insult on a fucking feminist site. That pissed me off!!) and trashing her from the first sketch. The attention is good, the talking about it is good, and I know for sure a number of people'll pick it up without having intended to before. But honestly, the book's not out yet. Once it's out, we can see how she's handled. The high heels are a bad sign, yes, but the writing might yet be good. The character could be unique and interesting. The interplay with her ex-girlfriend could be fun. All we're guaranteed right now is a female hero who won't end up romance fodder for a male hero, which eliminates a pretty damned annoying convention right at the start.

And guess what, Newsarama asked Editor Stephen Wacker about her in their weekly after-52 Q&A session.

NRAMA: While she hasn't been in the series yet, the new Batwoman who will be debuting in 52 #11 was announced earlier this week, and she's literally been everywhere, with a lot of attention being paid to the fact that she's gay. We you in any way expecting the reaction she received? Has any writer "adopted" her, so to speak to give her voice and motivation, or is she a group project like the others?

SW: I wasn't surprised at all. I knew when the news was being released, so it's been a real countdown the last couple weeks. DC's publicity brigade of Stephanie Fierman, David Hyde, Alex Segura and Sierra Hahn, and many others, did a great job getting the word out and I hope people are interested in finding out more.

Look, you do anything with a Bat or an "S" on it and it makes a splash - see the Death of Superman hubub for an even bigger example of what these symbols mean to people outside comics. I also don't think it's too surprising that anything with the word "gay" attached makes news since it's a subject that really pushes people's buttons. Put the two together and suddenly I can't watch Anderson Cooper without a 36-inch image of Didio's face staring at me like some rogue DC Nation column come to life.

Creatively, the work is already done on the issue, so it was put together away from the spotlight. We're focusing on just trying to avoid the easy angles on the character and not make her story solely about being gay and, gee, how A) great or B) horrible it must be. Batwoman's appearances in 52 are decidedly not about the struggles of being a lesbian in today's crazy, mixed up world - that's my story!

Like most comics we do in the DCU, at its core, Kate's story is about someone putting their lives on the line for others and why they do it, it's about a hero...errr...heroine...ummm...no offense...…

Anyway, no one's specifically adopted her yet, but in 52 her story does tie into Montoya's, so make of what you will.

Sounds to me like the lesbian angle is just a way to connect the dots to Montoya, a little romantic complication for the 52 storyline. Why, I'd almost go so far as to say they're treating Montoya and Kane's sexuality as normal, as opposed to an unusual circumstance.

So far, I only see two immediate and confirmed gripes -- impractical high heels and impractical long wild hair. (Oh, and that the guy who wrote the NYT article is obviously fetishizing lesbians.) Valid gripes. These may be specifically characterizing her as extremely vain and patriarchally influenced (which might be a nod towards her Pre-Crisis past life) -- personality traits which do not mean she won't still be a kickass complex character. But which would distinguish her from other female characters.

Although I have issues with trading a good-sounding name like Kathy Kane for the clumsy, blunt Kate Kane. Reeks of "women with cute names like Kathy aren't as intelligent or competent as women with serious names like Kate" which greatly annoys me.

Until I see more, I'm optimistic, at least willing to give her a shot. I'd like to see more women in prominent positions in the DCU, and knocking them down because they debut with high heels or in a romantic storyline doesn't help.
Posted by Ragnell at 4:20 AM