I got my hands on the first John Stewart story -- Green Lantern #87 (Volume 2). To be honest I was expecting to hate it, but I wanted too badly to see John's creation. I think my low expectations may have been because of Winick's heavy-handed run on Green Lantern, but that's enough material for a whole other post.

Instead, I'm going to show first panel of the first page that featured John, and share two thoughts about it. 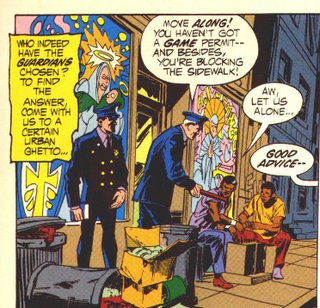 Notice the word Guardians is in strong text. Hal and Guy were both chosen by a desperate dying Green Lantern. So was Sinestro. John is the first character personally selected by the Guardians. The intention may have been to show that this was standard practice, but it's the first time we've seen it. I think this was a subtle characterization fo Hal. O'Neil essentially said that Hal would never have picked Hohn, even if the ring outright told him that john was the best choice. The higher-ups had to specifically step in and tell him "You will train this man."

I like how Adams subtly characterizes the "Good Cop" in this panel. He positions him directly beneath the halo. He's standing up straight, standing back from the wrong that's occuring and holding a book that resembles a Bible. Meanwhile, the "Bad Cop"stands on a darkened doorstop and shakes his weapon threateningly. These characters only appear for half a page, but he sets up the basic personalities very clearly.

Finally, I may be stretching a bit here, but it's funny that John's first words in print are "Good Advice." This is pretty much the role John plays as a Lantern now. He gives good advice. He was basically a mentor and advisor during Kyle's tenure. Now that he's back to active duty, John still only appears in the advisor role. He relays information from other heroes and spouts exposition to Hal, who then goes and deals with the action.

Hell, even in Mosaic John's personal story, John was there in an advisory capacity. He was there to try and get everyone to learn to communicate and live together, and keep problems under wraps -- but all John could really do was advise. The communication and learning of the Mosaic was in the hands of the residents. This may be because, from the very start, John tends to be portrayed as more intelligent, stable and thoughtful than the characters around him. He's generally not the person in need of advice, so writers use him to give it to the other characters. This probably contributes to his being shoved into the background.
Posted by Ragnell at 9:28 AM