Today's Flashpoint Friday at the the Source, and they've been releasing solicits all day. Naturally, we've been watching them in anticipation.

Remember how I said I was leery of this crossover from the Wonder Woman solicit? Well... about the time they solicited the second Aquaman issue with him holding a dead woman, I started to worry again. A quick glance at the covers up until then revealed a wide-eyed love interest, a villainess, and a banner referencing "Angry Amazons Unleashed!" along with the dead woman. And then more confirmation the Amazons were the Big Bad. I started, of course, to get irked.

Then they released the Lois Lane solicit. 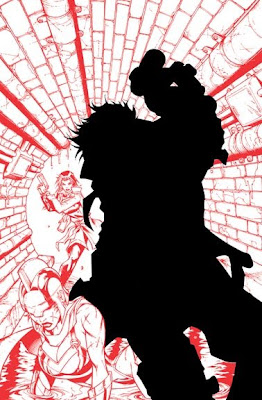 FLASH QUESTION: Lois Lane meets the mysterious leader of the Resistance – but will she survive?

So, we have a woman of action balanced out by an injured woman on her knees. There is also a shadowed man, meant to represent the leader of the resistence. This is where I really started to worry, because this guy is a surprise reveal. And yes, he could be anyone, but we've had a male character teased recently that has ties to the Wonder Woman franchise and a very specific connection to Themiscyra.

Granted, I have been complaining that DC should bring Steve Trevor back. Thing is, my brain's been going. On Twitter we discussed the horrible option this crossover would end with Wonder Woman marrying Aquaman, or at least confirming an arranged marriage to Aquaman could be happy and successful. That led to the worst possible things they could do with Wonder Woman.

In the meantime, we're seeing solicits that imply horribly evil Amazons, and the solicit for the first Wonder Woman issue says she wants to take over the world. As this is very un-Diana-like behavior, I'm thinking a shapeshifting/illusionist imposter or some form of mind control is behind it. And that leads me to DC's remarkable ability to do things that I've been wanting them to but nonetheless piss me off in the execution.

I've already outlined how making Steve Trevor a jackass would piss me off, but I hadn't realized there's another option. If he were to show up for the first time specifically to save her, I think I'd be quite pissed actually. Now, I'm not AGAINST Steve in the spotlight or pulling his weight and saving her at times. Marston had him save her butt every few issues it seems, and even Kanigher gave him some pivotal moments (though they were love interest coded), and one of my favorite things is a fight between him and Eros in 322. But it's one thing when he's been around and she saved him in the origin and regularly does the heavy fighting while he helps out and saves her once in a while. It's another thing entirely when the character in this form has been off the board for a full 25 years, and we haven't even seen the origin where she rescues him from the plane crash. It would be establishing this character in the opposite way for modern readers, from the start. And I can see them doing it because the most common complaints from fanboys who hate Steve, along with their suggested alternatives of Batman and Superman, seem to go back to the idea he's not man enough for Wonder Woman. As he has a masculine job, a masculine personality, was a war hero before he met her, and can hold his own in a fist fight it's not a stretch to gather they get this idea from how he relates to Diana. He accepts her help, he doesn't try to boss her around, and he gets his ass saved a lot by her. Introducing him sa her savior would change that dynamic for modern readers.

Of course, I hate this little idea I've conjured up, because I think it's fundamental that she save him first not only in his experience but in ours as readers. There are too few male characters who have this role in a romantic relationship, and the point of Steve Trevor was to PUT a male character in that role and still have him be masculine and attractive.

On the bright side, I could be jumping to conclusions and that could be Sgt Steel, Nemesis or Max Lord.

My fingers are crossed for Max Lord. Why? Because look what the second Wonder Woman issue's solicit is: 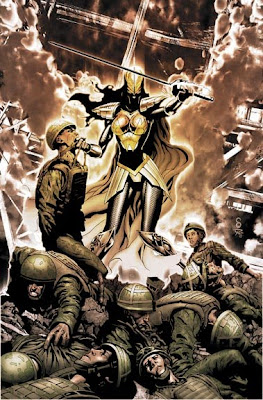 FLASH QUESTION: How many must die to avenge Queen Hippolyta’s death and satiate Diana’s fury?

That's right. "How many must die to avenge Queen Hippolyta’s death and satiate Diana’s fury?"

The implication, of course, is that Hippolyta is dead for Dian a's run amok. Because we know from past experience that the death of her mother unhinges her and makes her lash out against... wait a minute. She didn't do this after her mother died in Our Worlds at War. And she isn't doing this in the Odyssey storyline where her mother's dead again. So where the fuck did this idea come from?

Not only that, what is with this Vicious Bloodthirsty Amazon obsession? Don't they know we don't like that? That it runs contrary to the Wonder Woman concept? That it completely shits on eveyrthing established as far back as Marston? That it just pisses off Wonder Woman fans? That even if this is an imposter Diana, we're still saying that the Amazons are bloodthirsty and horrible and she's the only GOOD one? That this is just reactionary panic that if women were allowed to take a leadership position they'd automatically run roughshod over men? Do they really want to tell us that all-female organizations like the Amazons and the Star Sapphires are inherently unbalanced and liable to explode violently while male-dominated organizations are perfectly fine? And is Wonder Woman really the appropriate vehicle for that message?

Abenett and Lanning are good. They are good good writers. I have no doubt there's some sort of twist coming, but I have a lot of doubt it'll be worth it. And if Odyssey was leading into this, it certainly wasn't worth it. There's a strain of fandom that loves this idea, and several of them are comics writers. They don't like our compassionate, balanced, thinking Diana who knows when to use force and when to use mercy. They want the daughters of Ares. They want a violent, unrestrained woman who kicks men in the crotch even though she has superstrength and she can easily put them in a hold without causing any damage, and uses lethal force after saying "Don't call me Baby." They want bloodthirsty Amazons carrying spears, impaling male soldiers and ranting about the Patriarchy as they do so. I don't see the appeal at all, but it's THERE and people demand it. Everyone knows someone who only liked Wonder Woman when they read Kingdom Come and really wish she'd be edgier and they'd "play up the warrior aspect."

And whatever the twist is... Circe, Dr. Psycho, Diana's really Lyta or Donna, Dark Angel, possession by Eris or Belladonna (I forget her Greek name) or one of the furies, Max Lord, White Martians, soemthing to emphasize the wrongness of this timeline (which would still imply this is in Diana's heart somewhere), whatever... this desire is being fed. We'll have a crop of fanboys going "I preferred that, I want to write Wonder Woman that way again" after all this is over. We'll have reinforced the hard-edged manhating Amazon stereotype in people's mind, especially if the twist only applies to the female-led books and the Amazons are running amok everywhere else. And really, it's just not worth it. It's not worth going back to this idea that hacks away at the foundation of what makes Diana Diana.

And that's probably why so many people don't "get" her, or have trouble writing her. If you don't faithfully read her series, and all you see is her appearing as the humorless Amazon warrior who is the one person from her culture who doesn't kill everyuone, or is the person who goes bad in every alternate timeline, you have no fucking clue who Wonder Woman is or why she endures as a hero. That's why people don't realize she has a distinctive and enduring personality, because they never showcase it and when she DOES get a big part it's because they are completely tearing down the foundations of her franchise, and the basis of her personality. They're sabotaging themselves.

As I've said before with Amazons Attack. This will not ruin Wonder Woman. She has too much appeal in the mainstream community. She's an American Icon, and the franchise is strong enough to take Robert Kanigher, Denny O'Neil, John Byrne, Jodi Piccoult, Will Pfiefer, and J Michael Straczynski. She can weather the end of World War II, the death of the main love interest, the white suit era, losing the most iconic features, dating Superman and dating Batman. She can live through three different variations on the bracelets-based weakness. She can survive Millenium, War of the Gods, Our Worlds at War, Infinite Crisis, Amazons Attack, Blackest Night and certainly Flashpoint. She's survived constant supporting cast changes, 2 hard reboots and countless soft reboots. She's gotten through every fucking writer feeling the need to cast off the previous writer and rebuild her franchise from the ground up. This is far from the end.

But it is a stupid, stupid idea nonetheless.
Posted by Ragnell at 11:52 PM