I was going to write about what a terrible leader General Darnell is, but I got distracted by Tumblr. Today's topic is Wonder Woman's costume, again. I wrote a bit on her look and her personality, and almost got into it about Pre-Crisis vs Post-Crisis characterization but that's a very complex subject and I want to get my head straight first before laying out what I think about that.

So, what do you get rather than a link to my Tumblr, a post on General Darnell and an essay on characterization? This realization: 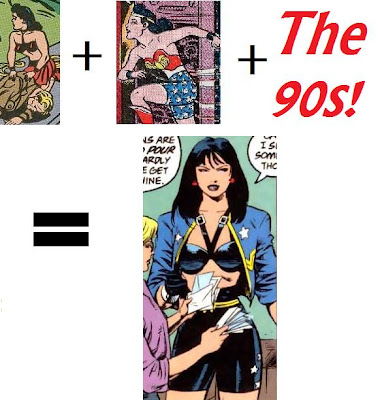 Which is all Kyle's fault.

And since I feel bad about not telling you why General Darnell's behavior is a threat to good order and discipline, straight out of Wonder Woman #279, here's 1/3 of the reason he sucks as a commander.

At the time of this scene, Captain Diana Prince works directly for Colonel Steve Trevor, who works directly for General Philip Darnell. Yes, that's in the direct chain of command and separated by three paygrades.
Posted by Ragnell at 11:35 PM