Two ways to brighten my day

Two good pieces of news via the increasingly indispensable DCWKA today. First, of interest to the widest audience, set photos and spectator camera footage of the in-production Wonder Woman TV show. My favorite is this one: 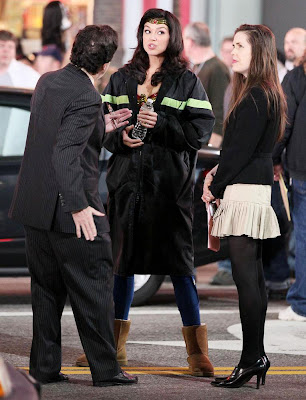 Oh, they've also made some minor adjustments to the costume. 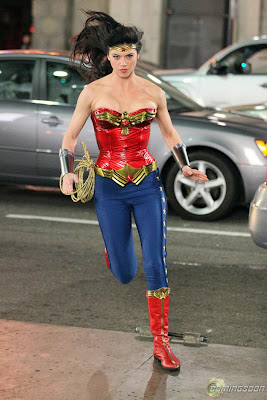 I would've been okay with the light blue but I do like this better and I do like the red boots best. Kinda wish they'd do something about that oddly textured girdle, but I'll never get a perfect Wonder Woman unless I write and direct it. It looks like it works, and maybe when the dust settles the comic Wonder Woman (that we only know for sure will still be in pants after Odyssey) will have blue pants and red boots too.

And there's longer video of her chasing that dude at the end of this post, and DCWKA's got a poll.

Second, and really only notable to me and the other two Steve Trevor fans on the internet (I love you guys!), they printed my letter in Wonder Woman this week. (I am such nerd that it makes me super-excited to be in a lettercol for the first time.) As I am still waiting on the mail every week, DCWKA was kind enough to scan the lettercol for me. 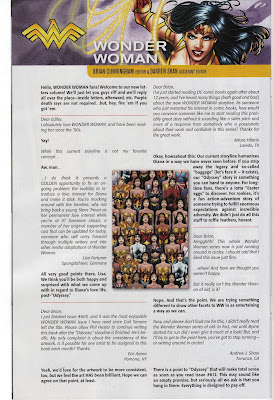 You can click to enlarge but I'll make it easier for you. 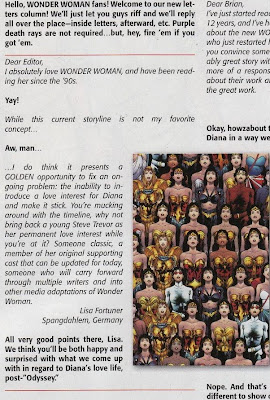 I'm bit worried by the "surprised" (I may be an optimist among Wonder Woman fans, but I'm still a Wonder Woman fan so any surprises worry me) but otherwise very happy about it.

And isn't it amusing that none of these letters seem to like the JMS storyline?
Posted by Ragnell at 2:30 PM