Back in Wonder Woman #180 (1968) Denny O'Neil offed Steve Trevor in a way that made both him and Diana seem pathetic and ineffective. Steve got shot and beaten by Dr. Cyber's henchmen, escaped (I got the implication he was let go on purpose but I missed any confirmation) and found Diana. She sent him to the hospital, which he was kidnapped from, and then tortured to death by Dr. Cyber's henchmen. Meaning she not only failed to save him once from this bad guy, but twice. And somehow the white suit period is the best remembered of the Silver and Bronze Age runs. Chalk one up for the first major reboot in Wonder Woman history. (But more on Mr. O'Neil's mistakes later.) 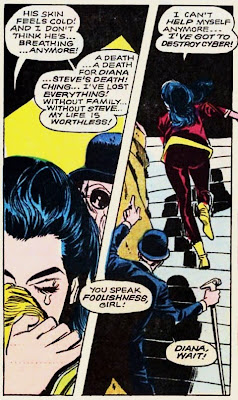 When we get to Wonder Woman #223 (1976), Mark Pashtu brings him back in what's actually a pretty sweet way. Diana's memory had been wiped of his death because Hippolyta knew she'd be really upset by that. This gets revealed to Diana when Aphrodite returns him to life as part of some heroic fitness test. (As this is Wonder Woman, the superhero who most directly recalls the Great Heroes of Folklore and how they got arbitrarily tested all the time, this works for me.) Aphrodite reveals she has passed, and is about to take him away again when Diana convinces the goddess to leave him alive.

They try to settle in on Steve knowing about the Diana Prince identity, and recovering from the trauma of death and resurrection, and having to rebuild his identity from scratch. Ready-made drama, right? Well, it doesn't work for them so come Wonder Woman #248 (1978) Jack C. Harris offs him again. Also by having him tortured to death, after intense interrogation and a machine/magic combo that sucks out the lifeforce Aphrodite had granted him to give to some... thing. I only really remember that he had converted to her religion. Isn't that sweet? 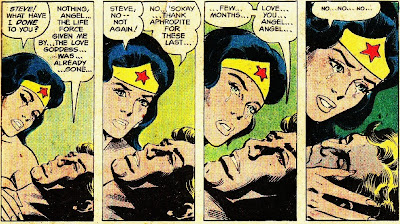 By this point Steve Trevor has died in-continuity twice. (I'm starting to really think this and all the letters in the lettercol that call him things like "helpless ragdoll" are significant indicators of how people feel about a man who pairs up with a powerful woman than any real weakness with the character.) Diana's lovelife is beginning to look like Kyle Rayner's, but with just the one guy.

Then Gerry Conway comes along and wants him back and he manages it in Wonder Woman #270 (1980), which along with Wonder Woman #271 is now one of my favorite Wonder Woman story arcs. It's a giant middle finger to fans who think the franchise is better without Steve Trevor, topped off with confused Amazons and a horrified Hippolyta.

At the end of Wonder Woman #269 Diana's still depressed that her boyfriend died (again) so she goes home to sulk. She is so miserable that Hippolyta prays to Aphrodite to rid her daughter of these horrible memories. Aphrodite points out that it might not work. Still, she decides that maybe it's better to have loved and lost and forgotten about it than to have loved and lost and be so miserable about it you can't love again. So she summons the Mists of Nepenthe to wipe Diana's memory. 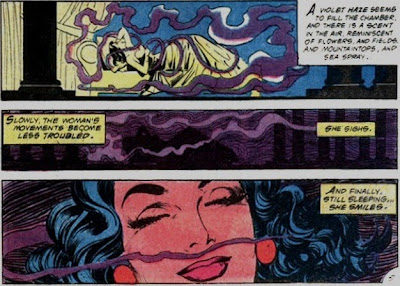 Diana, rid of the memory, is finally able to smile. And on the very next page... 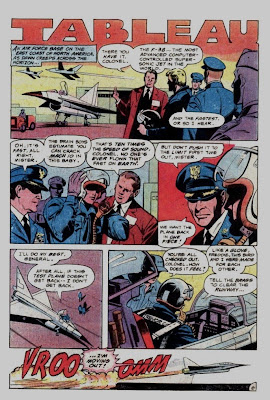 While Diana does the hero thing for the Amazons we get a couple one-page interludes about a blonde Air Force Colonel testing an experimental jet that'll reach Mach 10. We also learn that Paradise Island is partway in another dimension, which is pretty cool. Oh, and that experimental jet crashes into the ocean right next to the boat that Diana and the Queen are standing on. 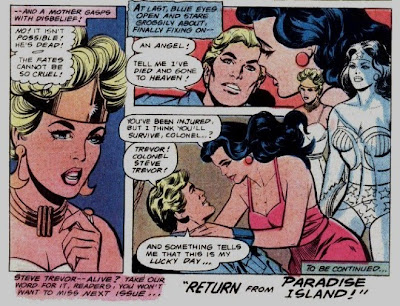 So just how does Aphrodite explain this one? "There is more than one of everything and the Fates ship Steve and Diana. Enjoy the rest of the Bronze Age."
Posted by Ragnell at 5:56 PM