They went ahead and cast the first male, Pedro Pascal as Ed Indelicato. So far, I don't know ANY of these actors but I like the characters they've chosen.

I'm always glad to see more Ed, actually. We don't get to see him too often because the Wonder Woman franchise has Rooster Syndrome. You have a lot of female characters usually only get one male character that's notable and active. And that character will be pushed to the side when they bring in another male character. Since they took Steve (still my all-time favorite rooster) off the board as the main love interest we've had a rotating Rooster chair. A lot of these guys (Mike Schorr, Trevor Barnes) didn't work for me. Others like older Steve, Micah, and Nemesis were pretty enjoyable. (Achilles I thought had the most potential, but they erased his timeline.) 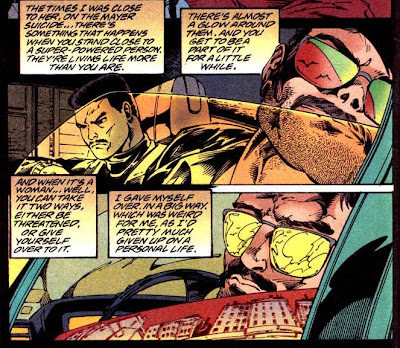 So far my favorite post-Crisis rooster has been Ed. He's cynical, cranky, macho, and nurses a crush on Diana that will never develop into anything substantial between them. As a foil for Diana, he's got a lot of potential and I think he's been underused so that writers can focus on their own pet roosters. When Byrne moved them out of Boston, Ed got put on the shelf.

I actually saw him the the Ghost Annual (Annual #7) before I ever saw him in the Perez run. He was the viewpoint character. I liked his voice, it was that hardboiled down-on-his-luck cop stereotype. The narration underscored the effect she has on people, to hear this sort of guy go on about her idealism and energy. There was a moment when he gave her good news so she picked him up and twirled him around. 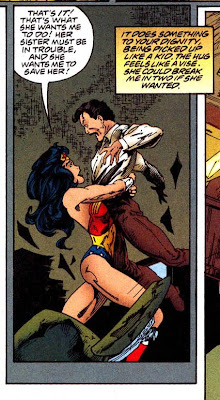 It freaks him out. I've kind of loved Ed ever since.

ETA: This show won't have rooster syndrome. They just cast a familiar face as another of the male characters. Still waiting on the Steve pick, though.
Posted by Ragnell at 11:24 PM