This is a bit much even in the Silver Age.

I understand that in order for genre fiction to work, the characters must have incredible timing and we will see many amazing coincidences and danger-prone people. That's why the smarter writers put their characters in jobs that help them find trouble, and their love interests incareers that get them into danger. (Lois Lane at the paper, Betty Ross in the FBI, Betty Dean on the police force...etc...)

Thing is, I always figured Steve Trevor had the amazing experience of landing on the secret island nation of Amazons and then a few weeks of recovery passed, and he got back to work before his next terrifying experience. His job was a brilliant pick, a military intelligence operative in the middle of World War II. There's no end to the amount of shit that he could get into and really the most unlikely thing was landing on that island. I just didn't realize, until I picked up my archives to read through them today, that he managed to get into trouble while recovering in the hospital.

Seriously, he doesn't get discharged until Sensation Comics #3. The three stories prior to that all center around Diana saving his life, though.

In All-Star Comics #8 she fishes him out of the ocean and nurses him until he's well enough to leave the island.

In Sensation Comics #1, they pick right up where they left off (and it's cute, because it has them talking in the plane, and her carrying him to the hospital) and he leaves the hospital because he gets some news about some threat to national security that only he can stop. (Some gas thing that I guess had something to do with info he already had.) Diana follows him, saves his ass, and is kinda surprised when he can't jump out of the way of danger as fast as she can so he gets even more hurt than before.

And in Sensation Comics #2, he's still in the hospital. Safe and sound, right? Nope, he gets kidnapped.

At least with Lois, we can kind of think that there's a gap between dangerous situations. This guy? He will be lying sick in the hospital and STILL find himself in trouble. No WONDER he was set on marrying Diana. It's for survival.

There's even a Silver Age story (Wonder Woman #101) where he bets her that if she saves his life three times in 24 hours she has to marry him. He's expecting to do dangerous test flights all day, and is disappointed when Gen. Darnell grounds him.

So he's pouting and she's giggling at first, then at lunch he sits in the sun for a quick nap. And...

That's right. A piece of a rocket falls from the sky and nearly kills him. Even Diana has an "Are you kidding me?" face at this. 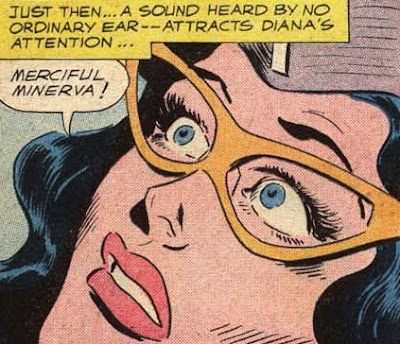 This is a guy who (in both the Golden Age and the Silver Age) can nearly get himself killed in his sleep.

And then a gang of armed gunmen try to shoot him. Oh, and then he nearly drowns but Diana manages to keep her independence by saving him twenty minutes past the deadline.

So far, I can't find a Steve Trevor and Lois Lane team-up, but it must be a hell of a thing. Like sending the Scarlet Witch and Longshot into a casino.
Posted by Ragnell at 9:42 PM