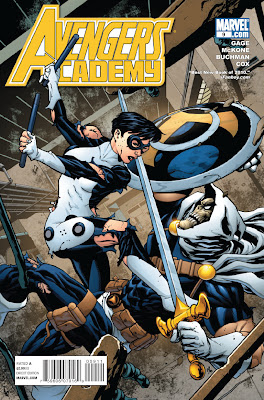 They've put out a preview for this one, so I'm optimistic it will ship on time. It's the book this week I'm looking forward to the most, because it continues my favorite Avengers Academy subplot, Quicksilver and Finesse.

Finesse really is my favorite new female character. You know that Data stereotype, with the robot who wants to have feelings and understand humans? How super-played it is? Well, Finesse is the opposite of it, being a human being who can't seem to understand feelings. She can't even get her own behavior at times. It's really interesting to watch.

In addition to that, she is pretty much perfect at everything else and so tends to be a bit overconfident. I love that we have this hypercompetent woman who is a failure at the stereotypically feminine area of intuition and empathy. It makes her very unusual.

Her entire motivation is she wants to learn new things. At every turning point, Finesse's thought is "Can I learn something from this person? Can I learn something from this action?" If she can't better herself from the action or interaction, she doesn't see the point of it. She is not altruistic or sympathetic towards anyone, but she's also not vindictive or actively malicious.

She has a fixation on Magneto that will probably bite her in the ass later on.

Plus she may be a villain's kid (and this issue is what promises to confirm or kill that possibility), and they have her tangled up with my favorite teacher on the team. Hell, this has actually redeemed the horrible Lie storyline for with the blackmail angle. Finesse, not understanding or empathizing with anyone, is constantly trying to test things so she can manipulate others into behaving the way she wants. (So far there's no indication this is for control, but because everyone else can do it and she can get people to teach her new things) She tries a little schoolgirl gushing on Hank, for example, and is disappointed it doesn't work. So for Quicksilver, once she figures out he lied about being a Skrull she decides she's going to blackmail him into teaching her everything Magneto taught him.

This is insanely amusing to me for two big reasons:

1) In the last Finesse issue, #2, she observes an argument between Pietro and Hank over appropriate training methods. Hank doesn't feel it's right to use the methods Magneto used, even watered down and with the safety on. Hank wins, but Finesse wants to learn the Magneto lessons. So... she is blackmailing him to teach her things that he already wanted to teach her.

2) She is an amateur at manipulation, and really doesn't understand how to do it. Contrast that with Magneto, who has practiced manipulation as the leader of a terrorist cult, the leader of his own country, convincing one of his sworn enemies to become romantically involved with him, and in a multi-decade struggle against a TELEPATH for the most powerful followers in the mutant community. Magneto is a master at social relations. Since he was a teenager, Quicksilver has found himself playing delicate manipulation games with Magneto where they do things like try to convince each other they are on the same side and see who double-crosses the other first. And judging by how pissed off Magneto was over the last game, documented in House of M... Quicksilver won. (And yes, I am prepared to argue over this one.)

Even discounting that last one, the fact that Pietro can play at all on Magneto's field means Finesse is in for one hell of a lesson here.

Gage has said that one of the kids will definitely go bad, and maybe others. I hope Finesse stays good because she's a real departure from the typical hero. I guess a lot depends on what happens in this issue, how the Taskmaster reacts to her and how she reacts to him. Maybe it'll open her emotions. Maybe it won't, but she sees a logical reason to follow one path or another.

The setup here is she only has Quicksilver for framing, but that might be the best chance she has. Hank, Tigra, and Justice have been mentoring the other kids and they are very touchy-feely teachers. Finesse just can't comprehend that, she needs a much colder and harsher perspective. Quicksilver is one of the most emotional members of the team, but he protects his heart well. We know he's capable of a lot of caring and kindness if she does have an emotional awakening here and needs sympathy. And if she doesn't, Quicksilver can strip away any appeal to pure heroism and present a brutal picture of reality. He can take it down to her odds of survival and success on either side of the moral divide. Every other teacher will come down to "This is the RIGHT way to act," but Pietro's much more cynical. He's bickered over right and wrong with his father, he knows that villains think they're in the right usually. He can make a good case for "this is the best way to act" and not tie it to mushy goodness.
Posted by Ragnell at 9:59 PM