Pictures of Alaina Huffman in costume as Black Canary in an upcoming Smallville episode. (Via) 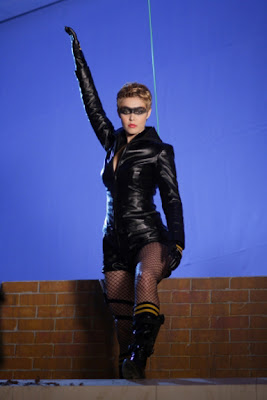 I really like how her costume came out. Not only does the actress look the part (I always figured on Black Canary as a petite woman with a tough expression), they kept the fishnets and the basic design, so she's recognizable as the comic book character. They went with short hair rather than a long wig that would get torn off during a fight, or long hair that an enemy could grab at in a street-level fight.

The makeup mask is interesting idea. If she has some quick way to smear it on like a spray or something like a solid rouge applicator (one of those big old-fashioned round bars that you could just smear circles on your cheeks with), it makes for a good quick change and won't fall off. But makeup like that doesn't seem to obscure the face very well. I suppose you could say it's a distraction. Between it and the fishnets and the dark alley no one is going to be able to properly describe her.

She must have to carry wipes to clean it off.