I suppose this one counts as spoilers so here's a spamming image. 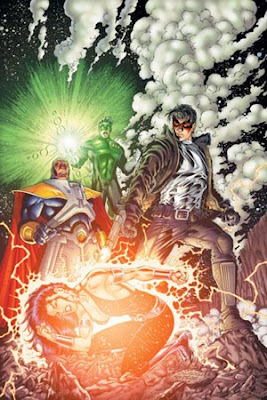 Anyway, to answer anyone who is about to ask (or has assumed by putting my name in the title of their post that I actually give a shit about this particular character) what I think of this after my recent ranting -- Sweet!!! I had Weeks 26-29 in the Donna Troy pool!

In all seriousness (and in all seriousness I really don't care much for that character) this all happened right after a fight (though she didn't do shit in it), there was no tantalizing flash of cleavage as she went down, and its been proven time and time again that no fridge can hold that woman. (Really, Kyle's reaction shouldn't be "No!" but "I know she'll be back next week, but I'm still very pissed off by the intention!") I can understand some of her fans being pissed (really, she didn't do shit in that fight, and you can tell this was to get Kyle good and pissed), but this doesn't strike me as really bad. A storyline where Donna dies and then comes back to life may as well be a storyline about Superman getting a cat out of a tree. You can do it well and interesting, and get some empathy going with the characters, but you really can't inject a lot of shock and suspense into it.

I'd say it has the positive of classifying that love triangle talk as the creators trying to mislead us, at least. Except for the sarcastic dialogue when Kyle first joined the group (Jason said "he's dreamy" about Kyle when talking to Donna, like he was teasing her over Kyle or possibly a bit jealous) that had me thinking maybe Jason carried a torch, I wasn't seeing the romantic tension. Donna and Jason tolerated each other, Kyle and Donna were friendly (but not friendly in that way), and Kyle and Jason were at each other's throats. That proves nothing, because Kyle and Jason are the sort of people who would be at each other's throats over the aisle seat in a movie theater. Really, with Kyle showing off like an ass (I swear, it seemed like they were writing Hal -- post-Parallax euphoria, perhaps?) and Jason was being his usual bright and cheerful self at the beginning its no wonder they started off badly and went to worse from there.

It is nice to see Jason being a proper asshole again. He was getting too comfortably cranky with the others.
Posted by Ragnell at 10:38 AM