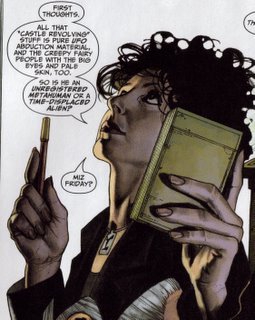 I freely admit to missing the symbolism on the first try sometimes. I miss it even when it's obvious. I have my off days, you understand. Times when I bypass it. And then, suddenly, someone points out something so unbelievably simple I feel like an idiot for missing it. I've been accused of obliviousness.

More often, I've been accused of reading too much into it. You see, I'm actually obsessed with symbolism. To the point that it's unhealthy. To the point where I miss blatant symbolism looking for subtle symbolism. The thing about symbolism is once you train yourself to see it, you naturally look for it. If it's a symbol that speaks to you and applies to your life, it will pop out at you. With me, it's always been gender symbolism.

It started with fairy tales. I found a copy of Fearless Girls, Wise Women, and Beloved Sisters in my high school library. The editor had been fed up with traditional fairy tales like Cinderella and Snow White. She didn't like the thought of what they could be teaching her daughter about life. Instead of updating these familiar stories to reflect a more balanced viewpoint, like many people do, she tried a different approach. She researched and tried to dig up folktales with better rolemodels. She came out with a beautiful volume of authentic folktales that portrayed women as strong, clever, heroic masters of their own destiny.

At the end of each story, there was a little editorial note. It lays out the reasons she chose the story, what it demonstrated about women's lives, some personal impressions, and sometimes a comparison with a more traditional story. She touches on symbolism, of course, in these notes. Specifically, how it applied to women and what kinds of lessons we were getting from traditionally fairy tales. It's still one of my favorite books, and was one of the first books I sought out when I got to my first station.

While I was looking for it, I found Goddesses in Everywoman in the mythology section. The back of the book said "Psychology/Women's Studies" but it sounded so interesting I had to read it. It was on the Greek Goddesses, one of my personal favorite subjects. The writer was a Jungian psychologist (and Jung's quotes and theories were about to pop up more and more as I read about religion and mythology) who saw the Greek goddesses in women's behavior patterns. She wrote about these different sets of motives, values, personality each coexisting in all women, some more active than others. A committee of archetypes, in everyone's head. It was plainly written, accessible to the laywoman, and full of points where you could see yourself and your friends.

Now, I'm not a psychology student. I've never taken a literature, folklore or mythology course. I've never set foot in a women's studies class. But I did become a little obsessed with symbolizing. This led into more and more books analyzing more and more stories. I studied up on interpreting my own dreams. I found a really good school of thought that taught you how to reason out your own dream symbols. For practice, I started applying what I learned to my own entertainment (movies, comics, books). Relating it to your own life and experience just naturally happens.

So, if you're like me, after so many books, your thoughts become consumed by symbolism. You eat, drink and breath symbolism. Until you're sitting in a lecture on cable connector repair and thinking about the symbolism of the female cannon plug connector (sockets) and the male cannon plug connector (pins), and how the female connecter can be either a receptacle (passive) or a plug (aggressive) -- and especially what it tells you about yourself that you (the only female present), are the only one in class who wasn't confused by all of those example pictures of receptacles with sockets, when you are trying to find the mating connector to a plug that has sockets and all you need to do is find the proper size and shape and order it with pins instead of sockets. It was funny, though, when the instructor tried to clear up confusion by describing the receptacle as female -- when while it is passive it's a fairly phallic symbol that is covered by a cannon plug. And everyone knows pins are male and sockets are female anyway, so calling a receptacle with pins female is just even more confusing.

You need a break, but it's really hard to ignore by that point. Even the subconscious stuff the writers don't even realize they are writing.

Especially the subconscious stuff the writers don't even realize they are writing.

No one should need to be told comics are heavily symbolic. It's the pictures. Everyone needs at least a basic understanding of dramatic shorthand to understand a comic book. Visual symbolism is a given. The really fun part is when the plot gets symbolic. You can walk through it like a dream and isolate the hidden messages.

This isn't exclusive to the great writers. Sure, everybody knows when to expect a deeper meaning behind the action. The name is on the front cover, after all. I've learned to tune out the symbolism from Grant Morrison and Alan Moore for the first reading. It's not that I don't love it, it's that there's so many distractions I need to shut that part of my mind off to follow the plot. (Barring, of course, gender symbolism) I've learned to zero in on the plot to the detriment of the theme. Guys like Morrison and Moore understand multiple layers of symbolism. You can read their stories and find several different sets of meaning for most symbols, and work them together in ways that make sense. They're doing those on purpose. They give us exceptional symbolism. 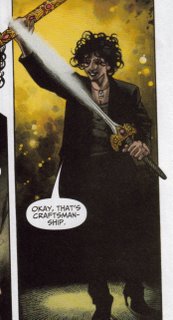 I love the symbolism of the normal, though. Most writers have some level of understanding about symbolism, and they make up for it with instinct. That's when we get the stuff that just randomly fits together. The average work-for-hire writer who probably didn't mean to do that, but it fits and reinforces the point. The multiple writers who somehow string a secondary character's entire life under one central theme, while not even using her to further the same story objectives. And they keep falling into the same symbolic lessons. This way, the plot becomes part of the characterization. It just fits, beautifully.

That's really what I love about superhero comics. They are serialized fiction passed from writer to writer. We get to watch the continuity. We get the fun of digging the symbolism out of continuity, and making it whole so you can observe the entire picture. I enjoy having to work the little inconsistencies into a character's personality, and finding what was probably mischaracterization by an unfamiliar writer adds a deeper facet to a character. In the end, you not only get a complete picture of a three-dimensional human being, but an underlying lesson that has been reinforced repeatedly. Appearance after appearance.

It's why I prefer to ignore the writer. Elayne asked me about that in the comments once. "I persist in believing there are no bad characters," she said, "just badly-written (or badly-drawn) ones. I'm curious as to why you never mention the people who write and draw the characters you examine. These characters literally do not exist unless they're being written and drawn by a real person, so it stands to reason that any discussion of their "personalities" would need to touch on the actual people writing and drawing them." It's partly because it destroys the continuity. If something is "out of character" then a deeper aspect of the character that explains this behavior does not exist. It's pulling back the curtain and destroying the magic. It takes the fun out.

And besides, I have my favorites. I like some stories that really aren't very well-written or well-drawn because the symbolism spoke to me personally, or the plot, or just something the character did. I suspect some writers just think like I do, so their stories seem more valuable to me than arguably better crafted ones. I need to learn to stop getting defensive about certain writers, characters and stories. I usually fall back on the symbolism. That's when I can practically hear people sighing, and can see their eyes rolling from across the country. "You're reading too much into this" signals the end of a lot of online conversations for me. I also get "You're just looking for reasons to hate it!" too. When in actuality I'm looking for a reason why I hated it.

My thoughts on symbolism have gotten me blasted for the umpteenth time about a certain character. A character I examined hoping I'd start to like her again and came out much more disgusted than I was by her surface portrayal. I don't know why I'm so upset about it tonight. Maybe because no one else seems to think like I do. Maybe because I knew when I answered the question I'd get jumped on by bystanders. Maybe because I've laid out these reasons a few times before and I specifically said that they won't talk me into liking her. Maybe because earlier on the thread I expressed a small amount of sympathy for her fans. Maybe because I made a comemnt and brought it up, but I was just sick of the vitriol wasted on this character death, which probably won't even take. I just know I'm too angry to respond right now without getting into a huge fight.

(My apologies to those who saw the Helligan pics and expected a Seven Soldiers post.)
Posted by Ragnell at 9:25 AM