I've run out of synonyms for blinding fury, so bear with me.

I've been blogging for quite some time, and I've had a few of these dry periods where I don't post much and when I do it tends to be something lackluster or sad. I suspect these periods happen because I'm not especially anxious or angry about something fictional (and I have a rule where I try not to blog politics or work) usually use this blog as an outlet for rage. I do this for rational and irrational reasons. I prefer expressing my anger to bottling it up. I've found that if I dedicate some time to writing about my reaction I can often find the underlying truth to it, the real cause of my anger rather than the often frivolous-seeming trigger. It lets me network my outrage, find people who feel the same way about these things and commiserate. And it lets me do some writing that can be clever and beautiful.

I'm not about to say everything on this blog is clever and beautiful, but every once in a while I get a turn of phrase or an analogy that makes me really proud. I think there's a poetry to ranting, if you really get yourself going, and you can come up with some vivid images and phrases to convey your level of upset to someone who is not reacting as severely. I'll often get a little carried away by that and express a higher level of indignation than I feel.

All the more disappointing then, when I run across something so infuriating, so gut-wrenchingly awful and insulting that I can't outline my reasons for it or come up with a pleasing way to express just how terrible I think it is.

I came across that today. The preview for Secret Avengers #21, courtesy the vigilance of David Brothers: 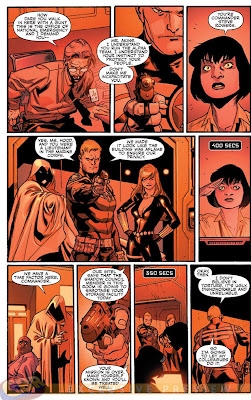 Let's move in for a closer look, just to make sure we're seeing this right. 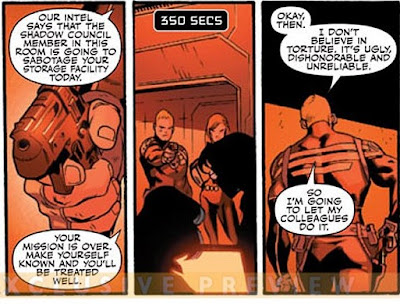 Yes, that is Captain America saying "I'm going to let my friends torture you" like it's some sort of cool badass fucking thing for him to say.

I agree with David on the reasons this is vile. This subject for Americans is too raw and important to be treated like this.

And maybe it's a trick, and he's just trying to intimidate the guy but you know what? Fuck that. Fuck that stupid idea where it's okay to pretend we don't have any principles like it's not something that treads on the line of not actually having any principles, where it's okay to pretend threat of torture is good because it's not as bad as actual torture.

And oh god, just the thought that this character, the symbol not of everything my culture is but every ideal my culture aspires to be, actually walking out of the room to let someone else do this is so infuriating I can't even verbalize it. I was so angry when I read that page that I had to stand up, and walk back and forth doing breathing exercises so I wouldn't fall into a hyperventilating frenzy at just how careless a treatment of the subject and the character this is.

There's a way to handle this and show the character isn't perfect. Ed Brubaker wrote a scene in the "Winter Soldier" storyline where one of Captain America's colleagues, a Vasily Karpov, tortured a Nazi for information. He didn't interrupt. He in Karpov's territory, outnumbered by Karpov's men, and had the rest of the Invaders and the war effort to think about it. He stood outside the tent brooding, and confronted Karpov about his methods. He showed clear disapproval, but he compromised himself and it was clear to him they only shared a side against a common enemy. And later when Karpov turned out to be a fucking horrible piece of shit it was reinforced that the sorts of people who do these things are bad people, at least. At best, it reinforced for the character that he should never have allowed this sort of shit to go down in a camp he was in, or allied himself with that sort of man.

This? This is bullshit macho posturing. This is "See how badass he acts and sounds?" This is the loophole as a joke to show he's kinda clever, in addition to being unprincipled. This is treating Captain America like one your anti-heroes, because hey, everyone loves them and really they're the only kind of heroes you can write.

Except he's not like them. As David says, he's like Superman and represents the best of us. Captain America is your honest-to-god every good thing from the American culture, everything worth saving of our values, placed into a body that can make a difference in the world. He's the guy who is not only supposed to adhere to the moral standard, he sets it for the other heroes. Your anti-heroes, your fallen noir stars, your monstrous demeanors that cover hearts of gold and tarnished but upward-looking souls will pull this. They're coming from the bottom up, and steeped in the flaws of humanity. Captain America is already up there, though. He's established as an idealized hero, to the point that in the MArvel Universe he is the indicator of which side occupies the moral high ground. Having him do something like this, even in his Steve Rogers super-soldier leading a covert team garb, Says something about the moral high ground.

Even as a trick (ETA: It is not a trick), this is the further dilution of the sincere sadistic brutality into acceptability as "tough tactics." This is a complete misunderstanding of Captain America, the subject of torture, and the reality of what's going on in the United States right now.

The only thing left to say is Fuck You, Warren Ellis. Avengers is not Nextwave. Captain America does not fucking act like that, especially not for one of your cheap fucking jokes.
Posted by Ragnell at 11:25 AM