Who's up for an old-fashioned letter campaign?

The other day I posted this on tumblr. 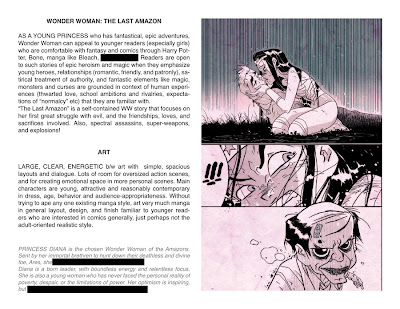 All right, so Ben Caldwell's Wonder Woman pitch got attention back when I was on the way to Afghanistan so I never got a chance to comment on it (even to note it has lovely art), but tonight I'm thinking about Wonder Woman, DC current direction for her, fans and such. A postcard campaign got the series renumbered to 600 rather than reset at 1 for this latest reboot. Letter campaigns got Manhunter two reprieves. A letter campaign brought Stephanie Brown back from the dead.

I think there's an off chance we can get this published, or at least get it in their heads that we want Wonder Woman to be for young girls too. And if it works, we can finally have a Wonder Woman book to give to our younger family and friends. That should be something worth shooting for even if you don't like certain aspects of it.

So, if you'd spend postage to get this a second chance, please Reblog. We'll get organized if there's enough of us.

Most of the reblogs happened within the first hour, and it seems to still be slowly trickling throughout the community five days later.

As a thoroughly unpleasant person by choice, I'm not a particularly effective leader. I'm also someone in a ridiculously busy job who can get called away from her hobbies for long periods of time in order to take little trips, or cover for people who are on little trips. So I'm not a particularly good fit for fan activism, however... No one else seems to want to do this and this is something I think can work.

Like I said, fan letter campaigns have gotten books extended, characters resurrected, and Wonder Woman renumbered rather than rebooted for a fourth issue one. DC right now is flailing about for something, anything, they can do to make Wonder Woman a seller again. There's a bit of an interest upsurge because of TV show casting and the fact that every major superhero property to hit the main-stream has been male-dominated, and the first character to come to mind when they ask what female superhero can have a movie is Wonder Woman.

And lately DC and it's related companies have passed on every chance to reimagine super-hero related properties for young women. But everytime something like Caldwell's pitch, or Lois Lane: Girl Reporter or now Barbara Gordon, Girl Detective hit the internet as a failure every reaction seems to be: "What is WRONG with them?" And to me, the biggest "What is WRONG with them?" is passing on any female-aimed Wonder Woman adaptation, because Wonder Woman was originally pitched as a way to bring girls into superheroes. It stars a princess superhero who dances between high fantasy and utopian sci-fi. The classic cast is all female except for one token boy, like so many other girl properties. Wonder Woman is a girl franchise, most successful at times when it is accessible to girls (the 40s when every kid read, the 70s in TV form when every little girl watched, and now she's at her best in merchandising, which women eat up), but they're resisting every pitch that's designed to bring her back to girls.

Meanwhile, DC's desperate attempts to revamp Wonder Woman have led us again to a point where the very opposite of her concept is emphasized in all of the solicits (and interviews with the crossover writers) even as better writers desperately try to keep true to the character and still emphasize balance. And these attempts to revamp her always seem to come back to the same ideas, which are custom-designed for the shrinking superhero audience that would already be reading Wonder Woman if they wanted to. All of this as the audience she's intended for is unaware that an icon of this genre was in fact custom-designed with them in mind.

Really, the whole thing is indicative of some very thick heads and soft spines. 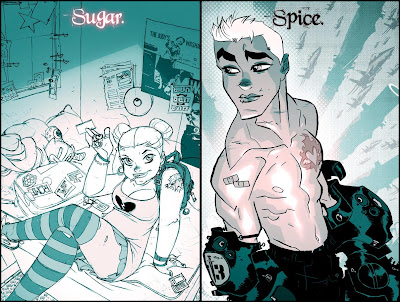 However, if we were to give them impression that a number of us would buy the thing if we saw it on the shelf, they may be more inclined to open their eyes and take a risk. I think Caldwell's pitch is the best shot at this. It's using Wonder Woman, who has serious brand recognition but much less out there than Superman or Batman, and who won't be mistaken for a spin-off or tie-in to another property. It's specifically designed to appeal to the fantasy readers and the romance readers as well as the adventure readers. There's some imagery that I'm sure is meant to appeal to the coveted audience of Twilight but unlike Twilight, it features characters and relationships originally designed by a psychologist to turn traditional gender roles upside down and portray girls as heroic and active. 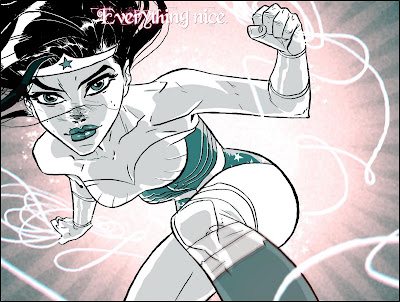 And it has one major thing going for it that some of the other rejected properties don't have. It's from a creator that has already been allowed to write the character being pitched. Caldwell got Wonder Woman for Wednesday Comics, someone at DC was already willing to trust him with her. He's got a foot in the door, there, so logically he's got a better chance of them letting him back in, especially based on a fan campaign. And if this idea works, and sells, it opens the door for other properties like Lois Lane and Barbara Gordon to be optioned for a wider audience.

Hell, even if there was something else blocking Caldwell's pitch in particular, we might get into their heads that we want a modern Wonder Woman aimed at young adults and get someone else's pitch through.

If it doesn't work, and they use it's failure to turn down other ideas... We're in the same boat we're in if we never tried, except without a streamlined Young Adult Wonder Woman story we can give to our younger female friends and relatives to introduce them to a female superhero.

I'm up for this, and it looks like a large number of people are. Thing is, I'm pretty busy in my regular life, so I'll need a lot of help. Drop me your email in my askbox or my formspring if you're up for it. We'll get a mailing list. We'd have to put together a website, set a date, write up our reasons and find ways to expand beyond people who read my little blogs.

Your reblogs, retweets and links are appreciated here.