Steve Trevor WILL be on TV again.

Okay, so they have finally cast Steve Trevor and IMDB was wrong. It's actually this guy: 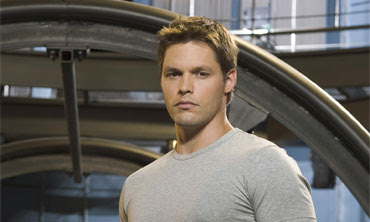 A simple image search reveals no nude cowboy photo shoot, so I am rather disappointed.

Still, he's pretty cute at least. I haven't seen him on All My Children or Knight Rider, but I'm getting used to his appearance. He's a bit bulkier than I'd expected. I do have some worries, though.

One is that the first picture I saw of him, on DCWKA, was this: 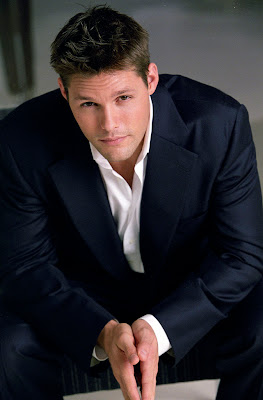 My second reaction was that he resembles David Boreanez. As we all know, Boreanez voiced Hal Jordan in New Frontier and I have this horrible nightmare that the 21st Century Steve Trevor concept is "Wonder Woman dates a blonde Hal Jordan."

I know it seems irrational, but... the animated movie guy was basically Hal Jordan, and it's not unheard of for writers to consider careers part of the characterization. Steve's a pilot to get him onto the island, so it's not a stretch for them to just characterize him as a pilot and use Top Gun as their reference again.

Never mind that his character concept is actually "soldier", and he's an intel officer who only ever uses his piloting skills for the purposes of the plot. (It wouldn't be farfetched if he was grounded because of his injuries when he crashed on the island, and--unlike Hal--wasn't bothered by not getitng to fly again because being in love is a hundred times greater thrill for him than flying a jet--but that's just a dream characterization.) Never mind that he'd work much better as the Anti-Hal, because there's no way in the deeper coldest chasm of Tartarus that Wonder Woman would date someone like Hal Jordan. Never mind that, personality-wise, he should be someone that it makes sense she like.

But I digress, that's just me panicking. On the bright side, many of the commenters on DCWKA have stated that he can't act so it's possible he won't be able to get "asshole" across, or they're just going for the easy combo of big, sweet and dumb from the Golden Age.


And anyway in the TV show his job isn't military pilot. It's... civilian lawyer, which brings me to my second problem and my first thought which was "He's a baby!"

Now, the rumor is that Steve in this is an Army vet who crashed on the island, had an affair with Diana, and later became a lawyer working for the Department of Justice. The assumption is that he's basically the same as we've seen, just after he got out he becomes a lawyer.

This means that he had to go through pilot's training and college in order to be an officer. THEN he had to serve out his commitment to the military. THEN he had to do law school and become a lawyer.

That's... That's a lot of years between High School and the present there. A lot more than this Justin Breuning guy looks like he has.

I can see them pulling it... maybe... if they decide he was JAG (more on why a JAG officer might actually be a suitable love interest for post-Crisis Diana later) and make up some contrived reason he was on a plane going over Themiscyra and was the only one to wash up. That gives us just law school and a service commitment that might've gotten cut short for injuries he got in combat, in the crash, or in the dangerous occupation of "Love Interest."

But... I know how old military officers tend to be, and he's pretty boyish looking for someone in the Major rank range. That's a Lt. face if I ever saw one.

This age thing might be a bit much for my suspension of disbelief.
Posted by Ragnell at 5:40 PM