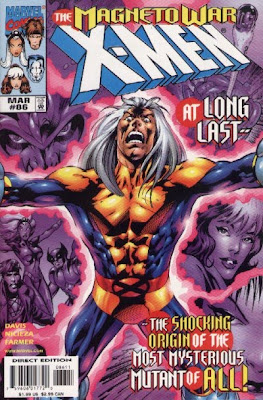 Joseph. He showed after Magneto was "killed" in the whole Onslaught mess, and everyone assumed it was the old man de-aged with bonus amnesia. And for a while he was on the X-men as they milked the whole distrust the stranger who strongly resembles our worst enemy for all it was worth. During this, he got romantically entangled with Rogue, and it worked nicely because it had the positives of the romance with Magneto, where a guy actually treated Rogue like a worthwhile person (fuck you and your bullshit macho entitlement attitude Gambit) without the negatives of him really being a hateful old man and the main villain of the franchise. (Though again, directed at Gambit, when your biggest romantic rival is the main villain of the franchise and that guy actually treats her BETTER than you do, you suck.) 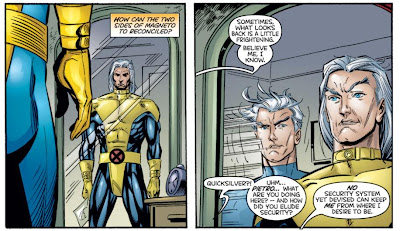 As time went on, Joseph proved he was a genuinely noble soul and real hero in his own right, and the people who thought he was Magneto began to think Magneto could have been a good guy if only the psychic airline had lost his baggage. Then two things happened (and as 90s X-men went I'm not certain which came first): 1) Magneto came back, and 2) We met Mommy. 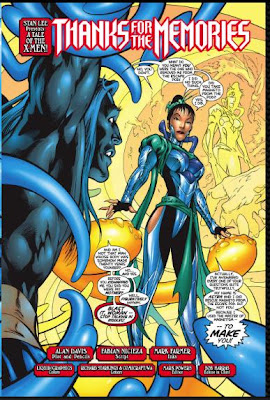 See, Joseph was just a clone of Magneto, created by his mad scientist ex-girlfriend in order to kill him.

Yes, that's right, Magneto has a good-guy clone-son and an evil mad scientist ex-girlfriend who wants to kill him... and Marvel is not using either of them.

It's weird, too. Astra is a really, really horrible person, but I really like her. She was apparently in the Brotherhood pre-Uncanny X-men #4, but left for ideological reasons or because Magneto wasn't screwing her or because Magneto dumped her or all three. The falling out was apparently over greed, Magneto wants to rule the world and establish his demographic as the one in power, she wants to rule the world and get rich. It was amplified by the sexual tension they had. She is incredibly fixated on how she felt about Magneto and how attractive he still is and how he either turned her down or dumped her, to the point that her preferred method of killing him is to clone him and tell the clone to call her Mommy. Because despite the fact that she knows he's a jackass and she wants to kill him, she still thinks he's one hell of a man.

For his part, he thinks she's a greedy soulless monster who cares nothing for her own people and is sworn to kill her on sight. He has called her deluded, so she may be a stalker-bad-guy rather than an ex, but I don't trust Magneto not to have taken a lover from his early cult when a woman was so readily up for the position. I mean... he was kinda creepy around Wanda sometimes (though not as bad as Xavier with Jean) and she was underage, his daughter, and completely repulsed by him. Astra's good-looking, older, and--even now that she hates his guts--really freaking hot for him. Also, he certainly seems to hate her a lot more passionately than he hates anyone else who's left the Brotherhood.

Also, I love the way they talk. Magneto is very lofty and formal, Astra is disrespectful, flippant, rude, and colloquial. She calls Joseph "Joey", and continually makes comments about how attractive Magneto is, comes on to Nightcrawler, reduces everything to it base level and constantly mutters about the shoddy alien tech that she's stolen and is using to attack him. Oh, and when she doesn't get to kill Magneto or take over the world by taking advantage of human gratitude, she says this:

I can't believe no one wants to use this character. I mean, how many supervillains, crazed parents, or psychotic ex-girlfriend/stalker characters have this much fun playing just one of those roles? She's having the time of her life being all three, and even stops to shake her fists at the heroes at the end!

But sadly, no one seems interested in her or her poor kid. Joseph dissipated after throwing all his power into the magnetic field of the earth to fix damage his old man did, and Astra was apparently "taken care of" off-panel by Apocalypse sometime. Really, they should bring both back, Rogue deserves a better love interest and Magneto certainly deserves more enemies. 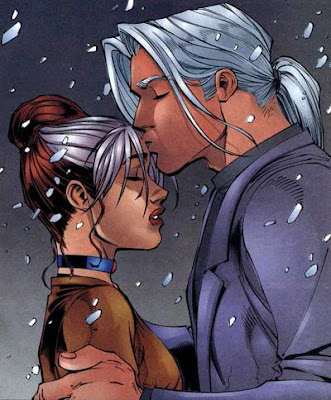 That's probably the main reason I like her. There's an ex-wife/ex-girlfriend stereotype that writers love to play with, where the hurt woman dogs the poor innocent guy all over the place. Usually, this woman is very unbalanced and the wrong was completely out of proportion with result. Basically, it's always Carrie Fisher chasing the Blues Brothers all over Chicago so she can kill both because Jake left her at the altar. He's a jerk, but she's going way overboard.

With Magneto? He's responsible for how much horrible misery? Beyond the whole genocidal maniac thing, just look at his personal life. His first wife left him because he killed a whole bunch of people in front of her. He lost his temper and crushed his own son to death once. He is the worst possible scenario of that smooth guy who gets you on his side and then reveals that underneath he is--to quote his daughter--just this horrible person. You can completely side with any woman who says "He treated me like shit and he needs to die" even if she's as objectively awful as Astra.

Maybe that's it. They don't really want that stereotype to be someone that you even slightly side with, and if the guy in question is Magneto you know he did something horrible to her. Personally, I want Marvel to make a thing of this. I want this to be a Magneto problem on multiple fronts. Because not only do we have Astra in limbo, we also have his good-natured selfless wife Magda.

Now, Magda is not established as being anything more than a baseline human, but her two children have radically different powers than their father and it wouldn't be too much for suspension of disbelief if an old lady speedster showed up some day. (Wanda's powers are established as having been fucked with by Cthon, so I'm figuring Pietro's the one displaying the natural X-gene.) Also, no stretch of the imagination to find reasons Magda might think her husband needs to be stopped or even killed for the good of planet, or at least her poor kids.

Beyond that, we have Rogue, who ends up fighting the old man a lot as part of her job description. She generally thinks nicely of him as a lover, even when she knows he's a bastard politically, but her major romantic interest talks like she's a piece of trash he found on the curb so it might be a comparison thing.

Dig even deeper to find Lorna's mother, who is human and dead but that's never stopped anyone in comics. She can show up like Carrie Fisher and launch rockets at him and it shouldn't cause too much confusion. People might not even wonder about the details until it's revealed she's Lorna's mom. 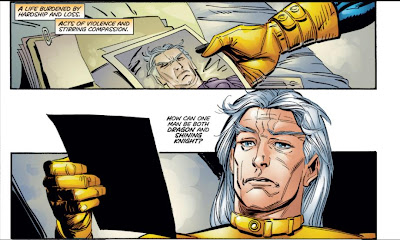 And don't get me wrong, I love Magneto, he is my favorite villain specifically because he can be portrayed so sympathetically, has moments with genuinely good intentions and will organically cross to the good side from time to time. It's just that given the qualities he has displayed as a friend, an ally, a leader, an enemy, and a father, I wouldn't be surprised if every woman he ever slept with ended up trying to kill him or at least severely inconvenience him. At the very least my Dream X-book is that three of these four women team up to attack Magneto.

With Bova as their Jarvis.
Posted by Ragnell at 3:30 PM