Lately on DCWomenKickingAss she's been running a contest for the most memorable moments in DC History. (Most recent poll.) I'm pretty sure most people are like me and a number of the most memorable things are the first time they encountered a favorite character, or at least the first time it hit them that this was going one of their favorites. There's a quote, or an action, or an image that is just burned into your mind and forever associated with the character after you've seen it. At least, that's how I've been voting. I look at the characters involved and judge if I'd remember that just from the character being mentioned, or if it's just a fairly cool moment. This has made it fairly easy to vote every day. And while my tastes really don't seem to overlap with most of the other nominators I'm reasonably certain that many of them are coming from the same attitude.

I think with Wonder Woman in particular many of us can pinpoint when we became fans. There's a point where you suddenly realize that this is Wonder Woman, and this is why she's had an uninterrupted publishing run since 1941. I know some of you were in love with the concept of Wonder Woman before we could read, but a good many of us turned up our nose at the First Lady of Superheroism before we finally came around. Some of us needed a little nudge in her direction.

I got into superheroes with the infamously soap operatic 90s X-Men cartoon, and that led to Marvel comics. I was a little down on DC at first, and not impressed with the idea of Wonder Woman. Fortunately, my sister had a friend who was an enthusiastic Grant Morrison fan, and Wonder Woman was in his JLA. I didn't really focus on her until the big fight with the white Martians. Now, bear in mind that every single one of these villains are as powerful as Superman plus Telepathy, Invisibility, Intangibility and Shapeshifting. 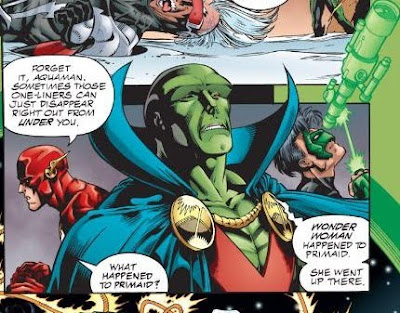 I know, she's not even in that panel. (She's in orbit, grappling a monster from outer space that has a mouth in its stomach.) Still, the point I became a Wonder Woman fan was that bit of dialogue. I'm not sure exactly what it is in this quote, but it's the first time I realized "Hey, that's Wonder Woman." I needed Martian Manhunter to point it out authoritatively to me. I needed him to let me know that Wonder Woman is basically a force of a nature and all he has to do is say her name so that people stop worrying that the Telepathic Tank that Changes Shape, Density, and Becomes Invisible has disappeared. 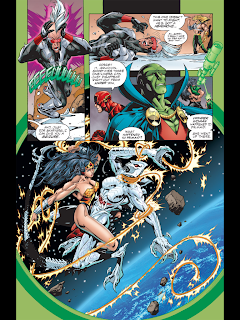 Two pages later, Diana lands on Earth and stands up. She attributes her victory to being able to hold her breath longer (in an exchange that leads to one of the best Batman lines in the history of comics), and they go on with the fight.

I'm not sure this moment would have been enough, but it was quickly followed by Wonder Woman doing more and more awesome things. The storyline that introduced Zauriel may have been the greatest thing ever because it featured Diana intimidating a freaking Angel, taking over as field leader, braving heavenfire (which burned her at the touch) to enter a Cherubim Chariot and tear out its systems, then go outside to keep it from falling on the city. Zauriel describes her actions in that storyline as "biblical", and we should bow to his expertise in this subject. She was continually presented as a force to be reckoned with, and the other heroes accorded her the proper respect. While my sister was buying our only repeated complaint about JLA was that there wasn't enough Wonder Woman and that wasn't because she wasn't used--it was because she was so damned awesome in this book no amount of spotlight was enough. Hell, Rock of Ages was specifically the reason my sister and I read Wonder Woman, because in the first issue of that storyline Kyle says Diana's dead (Don't let that turn you off the trade, she shows up later anyway) and we needed our fix! (It wasn't as good, though.)

I like Morrison's writing because I have a ridiculously short attention span and I require massive amounts of excitement in my fiction to prevent me from introducing unwarranted excitement into my life. His JLA run was and is well-suited to my tastes. I like really fast pacing where so much happens that sometimes you have to go back because you missed something. I like witty humor that fits seamlessly in with the action without focusing the entire plot around a punchline. I like that he never felt a need to stretch quiet character moments over seven pages, and instead had the team bond in one or two panels to the side of fight. I like a cosmic scope to my stories, and decisive heroes who know what the fuck they're doing and choose the ethical path without pages and pages of angsty navelgazing. I like when someone drops an idea that another writer would milk for an entire six issues in the background of half a panel. I like giant robots sitting on the ocean floor because enough action is happening in the book no one felt a need to show them getting beat up. (As opposed to when the action happens off-panel so that we can see panels and panels of people talking about it.) I like wall to wall weird when it manages to capture my imagination.

So naturally I really fucking like this run, and much of what else he's written, including the things people cite as hard to understand because those tend to be the extremely fast paced and esoteric stuff that benefits from a reread--the stuff that appeals to my short attention span and obsessive eye for pattern and symbolism. A great many of my favorite characters (and periods where I find I like characters I otherwise hate) lead back to Morrison's writing in some way. And yeah, I'll forgive a number of things from Morrison I wouldn't from other writers simply because so many moments in my mental "Favorite Moments of All Time in Superhero Comics" file were written by him, so many characters that on paper sound completely uninteresting came across as complete badasses under his pen, and there's so much going on in his stories I don't ever get bored enough to realize when he's offended me. (Yes, he's offended me but as he's usually been able to win me back afterwards. I don't tend to remember it even after I've realized it.)

Morrison is the one writer I would give a chance writing any character, but for years I've wanted him on either Green Lantern (Kyle Rayner) or Wonder Woman. (I've only just now got DCW on my side) People think that's because I'm just a rabid Morrison fan who wants him on her favorite characters, but the truth of the matter is that Morrison is the reason that these two number among my favorites. I can rationalize all I want about the inevitable sales bump, and that he'd freshen the franchise or what have you... none of that actually matters to me. He got me to love Wonder Woman to begin with, and I want to see him write her more.
Posted by Ragnell at 10:56 PM