Their suits even match.

I've been really enjoying Brubaker's Captain America run, especially the inclusion of Natasha Romanov, the Black Widow. I've been really fond of reading both her and Sharon Carter through the entire thing, but it's been disappointing that despite the fact that the costumes look like a big setup for a teamup, the two women haven't really spoken two lines to each other. (Maybe in Reborn. I think that was just briefly, though.) Natasha's talked ABOUT Sharon, of course, and they sound like good friends off-panel, but Brubaker didn't take that step to ever really have the two get together and hurt bad guys for an issue or two or five or an entire series based around the concept. And the "Year of Women" sadly went by without a Sharon and Natasha story. Seems Marvel just hadn't gotten around to it... until now.

We're also doing "Captain America And the Secret Avengers" which is primarily focused on Sharon Carter and the Black Widow, both of whom are important characters in Cap's orbit. It'll give them a little more spotlight and screen time than they usually get. 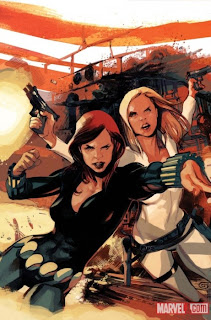 CAPTAIN AMERICA AND THE SECRET AVENGERS #1

Steve Rogers’ black ops femme fatales go on the hunt for a rogue assassin! The Black Widow & Agent 13 join forces to stop an under-aged assassin from taking her revenge on a killer of a headmistress. Fierce fisticuffs, death-defying duels and good ol’ fashioned espionage ensue as everything comes to a head in the Big Apple where the gals go in guns blazin’ against…teenaged versions of themselves?!

Not a big Tocchini fan (really didn't like his going out of his way to show us the downview of female breasts in his Ion run), but I will take him for this special.
Posted by Ragnell at 3:07 PM