One of the few light Disney movies in my horror-loaded DVD collection is Sleeping Beauty. I've been fond of this one since I was a little girl, even though the joke is that the heroine spends the entire movie asleep while the Prince does everything. But the makers of this movie found a way to remedy that and get the little girls in on the action in this story, and in doing so they created what must be the most memorable villain Disney ever produced: Maleficent. 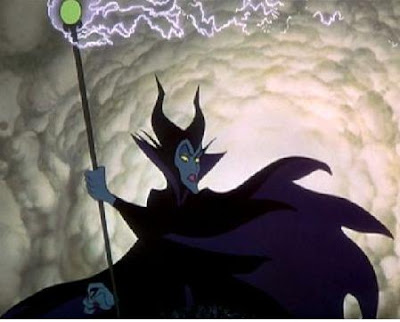 I had a greater than average interest in fairy tales even for a little girl, but princesses never came close to the top three appealing aspects of fairy tales for me. My imagination as a child was ruled by a triumvirate of Fairies, Witches, and Dragons. (Cats came in fourth.)

Maleficent is a Fairy Witch who can turn into a Dragon, which has to be the Greatest Parlor Trick in History.

And she has Style. (I like Style.) Check out the Viking Vampire wardrobe. She's the Fairy Godmother from Hell and is not afraid to look the part. And on top of her black and purple super-batbitch ensemble, she's got green magic energy and a wicked looking pet raven on her wicked looking magic staff. And the makeup, from the eyeshadow to the lipstick it just screams Mistress of All Evil. It's so perfect. The sort of villain that makes you think "If I ever fall from grace I want to look like HER when I land." I don't know of anyone who as a little girl didn't freaking adore this character. 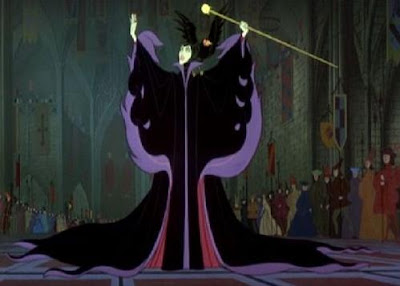 The whole story happens because Maleficent, who apparently has a thing about being left out, isn't invited to a big party celebrating the birth of the local princess. All the other fairies get to go, but she didn't get an invite so she's pissed off, and so she decides to act out every nerdy girl's revenge fantasy and show up to scare the shit out of the popular kids. She gets in before the third fairy gives her gift, makes everyone horribly uncomfortable, forces them to admit she was purposefully uninvited, and curses the brat to die at the tender age of 16. In doing so, she freaks out the King, she freaks out the Queen, she prevents the third invited fairy from giving a proper gift (thus depriving the princess of two of the four gifts she would have been entitled to if Maleficent had gotten an invite--and no doubt Maleficent would have given one hell of an interesting gift if she wasn't pissed off), she scares the King so badly that he destroys every spinning wheel in the kingdom causing hardship for anyone who wanted to make clothing, and she sets it up so that the Princess isn't properly raised and trained as a ruler when she comes of age. And when the time comes to cause the curse, she manages to enact it, freak out the girl, traumatize the fuck out of the Prince she marries (watch him after the big battle, he's got a light smile but his eyes are really wide, and he doesn't want to explain anything that happened to his father--I think he's pretty shellshocked), and destroy a good amount of the scenery. All while looking fabulous beyond measure.

Not only that? She is apparently killed by falling down a cliff. She falls down a cliff and there's a scene where purple and black smoke rises up from the bottom and the Prince looks over the ledge to see not a big dragon body or a slender fairy witch body, but her cloak with a sword through. There is no body at the end of this movie. They even do a scary close-up on it. The woman physically transforms into flying creatures and green light, casts illusions, and teleports, but the other fairies act as if she's dead after falling down a cliff, sending a cloud of purple and black smoke upwards, and leaving no body. Idiots. 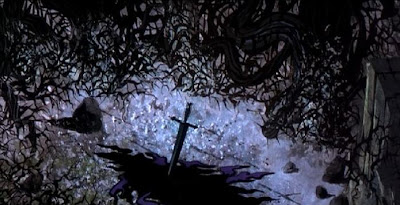 Now she does have some pitfalls. Turning into a dragon was scary and all, but if she really wanted to fuck up the Prince she'd have gone with a molten liquid, a choking gas, or some illusion to separate him from the fairy helpers (because she can change into gaseous and energy shapes). Flora saves Philip from several ranged attacks during the escape, but none of the Fairy Godstooges dare to directly counter Maleficent's spells, so this could been something they couldn't counter in time. She captures the Prince but doesn't kill him (in her defense, I suppose that some other destined true love might've popped up without him able to break the spell at some point, or some other fuckery would've saved him so he could save the day without her noticing--these are the rules of fairy tales, after all), and she leaves an axe in the freaking prison cell with him. Sure, she has him chained up so he can't reach it, but really all he has to do is ask one of those dumbass goblin guards to hand it to him and they probably will.

Oh yes, she has the dumbest Henchmen in Disney history. An army of dimwitted goblin soldiers that I believe joined the Air Force after she finally fired them. At least, I'm pretty sure I've worked with the idiot who was on patrol duty and missed the three brightly colored fairy women against the greenish brown landscape. These geniuses were told early on to look for a baby, and 16 years later they were still checking cradles. 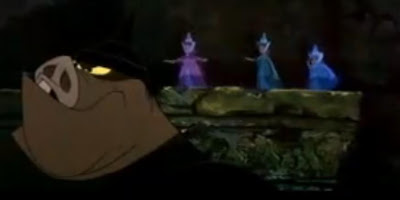 Bad hiring practices and mild mistakes aside, as the hierarchy of intelligence in Sleeping Beauty goes Maleficent's at the top. She is very clearly smarter than anyone else in the movie, especially her trifold sparring partners: Flora, Fauna and Meriweather.

But more on these morons later.
Posted by Ragnell at 10:13 PM