Remember back when that hideous female Star Sapphire costume debuted and DC completely ignored our points about how horrible and sexist it and the entire Star Sapphire retcon was, but some of their artists acknowledged that the costume might not work for men because God forbid we see manflesh in comic books. (Shh, don't tell them about Hawkman or Namor.)

And how we all pointed out that it was stereotypical and fucking stupid that the Star Sapphire Corps that harnessed the energy of love was entirely female because not only does that box women into the sex class role, but it suggests that men are incapable of tapping into one of those basic seven emotions that Johns was pushing as the building blocks to all sentient life. (At least Ethan Van Sciver agreed on that)

GREEN LANTERN #57
Written by GEOFF JOHNS
Art and cover by DOUG MAHNKE & CHRISTIAN ALAMY
1:10 White Lantern Variant cover by RYAN SOOK, FERNANDO PASARIN & JOEL GOMEZ
BRIGHTEST DAY continues as what readers have been asking for finally arrives: a male Star Sapphire in the form of the Predator. But how is this entity unlike the others? And what does it want with Carol Ferris? Meanwhile, the White Lantern is defended by an unlikely hero…
Retailers please note: This issue will ship with two covers. Please see the Previews Order Form for more information.
On sale AUGUST 25 • 32 pg, FC, $2.99 US

Yes, that's right! DC has decided to introduce a male Star Sapphire, and not only that--he's the Predator! Meaning he's hosting that big lizardy entity that lived in the violet power battery, the equivalent of Ion or Parallax.

So not only can men tap into love and harness it, this one is actually better that any woman who makes up the... um... Well, I bet Carol beats his ass. Let's check out the character design! 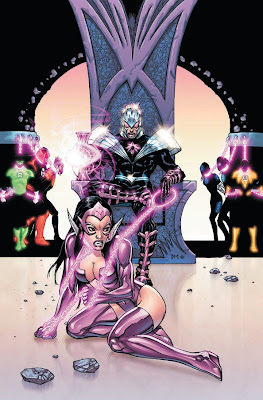 So he gets to be more in touch with the Violet and more powerful than all the women, and he gets to be fully dressed. Not just fully dressed, but hosting the embodiment of love and lust--the thing that is causing all of these really gorgeous alien women to run around with practically no clothes on--and he's covered head to toe in black with only purple accents. Oh, and he gets macho silver armor.

Yeah, I know the Predator is from the 80s Green Lantern stories and has historically worn silver armor on his shoulders, but you know what? Star Sapphire used to look like this:

Don't give me any shit about the costume being traditional.

You know what, I give up. I don't even have the interest left to rant. I could do 3400 words yesterday on the Sentry because right now I'm enjoying a lot of Marvel's output so I can actually give a shit about what's going on in that universe, but I'm past that point with DC. I'm finally dropping Green Lantern, and I'm down to maybe two or three DC books now, and DC used to be 90% of my pull list. This is not a boycott reesulting from outrage or protesting anything. I'm not trying to send a "shape up" message to DC by dropping the books. I'm just losing interest in the DC Universe.

I used to love DC, I was fanishly obsessed with the metaplot. Green Lantern in particular was pretty fucking awesome right after Rebirth, and during Sinestro Corps War and the the buildup for Blackest Night. I was having a blast during those company crossovers. Infinite Crisis, Seven Soldiers (which was worthy of being called an epic, a rare trait in pop culture), ONE YEAR LATER, 52, the Wonder Woman relaunch, the new Blue Beetle, joy at each renewal of Manhunter, Final Crisis, even freaking Countdown (where I was watching Kyle Rayner, Donn Troy, and freaking Jason Todd play off each other--if only they'd kept Ryan Choi with them). I was just devouring everything at DC.

But they lost me.

They lost me about the time it became clear that White Lanterns weren't going to be just as inherently bad as Black Lanterns and the potential moral about extremes being a bad thing--that had been building up by showing how surrender to a single emotion, and complete lack of emotion were all BAD--dissolved. They lost me when they decided Wonder Woman would make the best Star Sapphire out of the JLA. They lost me when they replaced Cass Cain with Stephanie Brown, making it so all of DC's derivative female characters are suddenly identical out of costume. They lost me when Hal Jordan stopped being punished for being an asshole. (that first year after Rebirth was priceless for this, as was some of the Blackest Night buildup, so I put it actually in JLA: Cry for Justice when he's an out of character asshole while other books tell us he's the moral high ground). They lost me when they said it was okay that Hal and Ray and Ollie can torture criminals. They lost me when Lian Harper was offed to send Ollie Queen and Roy Harper down story-arcs we saw resolved in the fucking 70s. They lost me when whoever was editing Blackest Night either didn't read the script aloud, or was actually able to say "White Power Battery" (yeah, that'll bring some fun visitors to this blog) with a straight face. They lost me when Kendra got dissolved in favor of Shiera, completely invalidating all of Kendra's story arc about being a different person (written by the same fucking guy who just up and replaced Kendra with Shiera), and Ryan was shoved aside and then slaughtered so that we can have Ray fucking Palmer as the One True Atom.

So yeah, I'm beyond ranting here. Next time you see me outraged, it'll probably be about Rogue or Quicksilver again. It's going to be a while, I think, before I can recapture my Care about what DC's up to.
Posted by Ragnell at 12:32 PM