I won't even come CLOSE to everything that's wrong with this picture...

Edit 8 JAN 10 1720 CET: I've promised to tell everyone know that Chris wrote his very astute Blackest Night: Wonder Woman review before I wrote this, and note that he is very handsome. At least one of these statements is objectively true.

Blackest Night spoilers ahead, but you can't really be much further behind that I am.

I'm sure I've written about it before, but I absolutely despise the Wonder Woman bondage origin claims. Whatever creepy personal ideas Marston had that were leaking (or being leaked) into his creative life (and probably not coincidentally, the creative lives of just about everyone writing and drawing comics back then because it sure as hell wasn't just Diana getting tied up in that period), it is a documented fact that he pitched the character as a comic for girls. That he wanted to bring female readers to the superhero genre. He wanted to give girls a story they could read and enjoy.

So Wonder Woman counts among one of the very few superhero genre characters that are legitimately a gift to young women. She is not a character to be marketed to young men. Marston assured the company the boys would read as well, but she's custom designed for young women. For god's sake, she's a princess who talks to animals. Her entire supporting cast, with the exception of one blockheaded love interest, was women. She is a character made with little girls in mind.

The bondage urban legend always struck me as a mean-spirited attempt to rob us of that. To strip her of all innocent and generous beginnings in favor of something uber-sexualized. To say that we weren't worth our own superhero princess, she had to be secretly aimed at young men. That she was really meant for boys. It's a way to steal Wonder Woman, and claim she wasn't ever stolen.

To be honest, that's why I've always felt they had trouble with her. She is a female-oriented character that they keep marketing to a widely male audience. They fill her with T&A and hire writers who figure she should either be a complete bore or the "woman you wish you could date" in the hopes that men are biting. Then they further ward off women by spreading the story of bondage in her origins and skimp up the outfit even more than possible (No one's seen her in shorts in how many decades?), and wonder why no one is buying the world's preeminent superheroine.

In the past five years, though, I'd gotten the feeling that maybe this had changed, that maybe letters and postcards about other female characters had suggested to them that there was an opportunity to market characters made for female readers to female readers. They started hiring female positive writers and female positive artists for the character, treating her as an equal to Batman and Superman, propelling her to a more prominent place in-story, and just pushing her more greatly than they had been for decades. She even got an animated movie! There were stumbles, but I figured maybe they were giving it a shot.

Then I clicked a link on Twitter and saw this monstrosity. 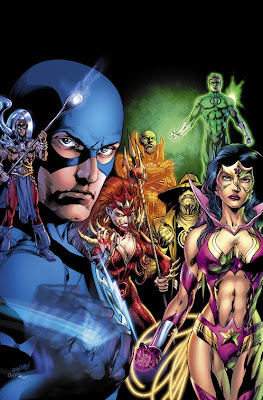 Let me make this clear, as I have complained about her lack of romance as relative to having Aphrodite as a patron extensively. In the Golden Age, this would work. She followed Steve off the island for love. But Steve's not the love interest in the modern age. They made him too old, wrote him out and married him off. He's been replaced by Superman--No... Hermes--No... Guy Gardner--No... Trevor Barnes--No... Io--No... Batman--No... Nemesis... Oh wait, we can't decide on a major love interest because every writer has to make their own or pair her off with their favorite! (Funny, this never happens to Superman who still has his Golden-Age Love Interest.) And since she has been decreed by DC to be an eternal virgin, none of these relationships ever deepen to the point that she would be especially attached to this person over anyone else. They tend to be flirtations and infatuations. So Aphrodite is shuffled to the background in favor of virgin goddesses Artemis and Athena (both greener than a pine tree in the middle of December) as her primary patroness.

They see nothing wrong with tying Wonder Woman to some smartass writer's abysmal joke about how women go CRAZY in relationships.

They see nothing wrong with taking a character who's concept is the person girls should all aspire to be and placing her with the group of women who are DEFINED BY THEIR ROMANTIC RELATIONSHIPS!!!!!

You can't just ignore Aphrodite's influence since the 80s and then suddenly decide her realm is the primary motivator in the character's life just because the character is the girl. Not without laying years of groundwork suggesting she's been fighting her need for love, which just hasn't been laid. She's been fulfilled the whole time without a man.

And you know what? She should be, as she's WONDER WOMAN. I'm all for bringing Steve back in some form--retcon, reboot, long-lost nephew... Something to give her the equivalent of Lois Lane again. But there's a reason they don't and never should (even with Steve in the equation) portray her as feeling like only half a person and desiring a soulmate above all else. Because she's WONDER WOMAN and that would send a really fucking bad message.

And that fucking costume. That godawful costume. Like someone vomited pink all over one of Solomon's concubines. They took one of the aspects of the character that is CONSTANTLY picked on--her skimpy costume (which is considerably skimpier than the skirt she debuted in and the shorts she wore after or even the tasteful bathing suit of the Silver Age)--and went and made it even skimpier, and even MORE sexualized, and then SHOVED her into a group full of women who thus far have been characterized as ALL ABOUT SEX.

It's the Ultimate Reminder that Wonder Woman is no longer for girls. She's been re-purposed for the lowest common denominator or men who refuse to grow up and deal with women on equal terms. She's not going to be given back to us, even though she was conceived as a gift for us. Too many people have managed to convince themselves she was always for boys to begin with, and if they can just hit the right shade of sexualization and male fantasy--the magic balance that Marston had somehow--they can make her popular again.

And it never seems to occur to them that she is not and never was meant to be a male fantasy. She's meant to be everything a girl would fantasize about being. I know, you're saying she's beautiful and sexy but guess what? That's not the kind of beautiful and sexy meant for the boys. It's not the sort of sexy that's there to be desired by the reader, it's the sort of sexy that's there because the person reading her wants to be desirable and POWERFUL in that way, as well as strong and intelligent and POWERFUL in those ways too. The reader is supposed to want to BE her, not just want her.
Posted by Ragnell at 4:17 PM