I was going to post a pretty cover, but I ended up getting into a fight in the comments of Kalinara's blog instead. I was a real asshat too (especially at the end there), but that's not what I'm going to discuss here.

Instead, I'm going to be even more of an asshat. I want to pick on this little paragraph of this little comment:

Oh, and I deleted the other post because I had a much better argument to make. You might want to follow example once your a Cass fan.

Again, so it sinks in.

Cass-fans are a minor subclass of Batfans. Now what I'm about to explain in no way says that Batfans are the losers of superhero fandom or anything like that. I know Batfans with wonderful taste. But being a Batfan is so common that it is practically a pre-requisite to being a superhero fan at all. Within the Batfan class are subclasses of Robinfans, Babsfans, Cassfans, CommisionerGordonfans, SilverAgeBatfans, GoldenAgeBatfans, MillerBatfans, Catfans, Jokerfans, Villainfans, Alfredfans but all are part of the general Gotham experience. All are members of the Batfamily and all fall under the umbrella of Batfans.

I always pictured superhero fandom as a pyramid. At the base are your wide-appeal franchises like Batman and X-Men. Nearly everyone enters the fandom through one of those classes. (There's a Marvel side and a DC side) Some people remain at the base and divide into little subclasses and have little sub-class wars, while others move on to other wide-appeal (but not quite so large) franchises such as Superman and Spiderman, up to the lesser known but still popular franchises like Wonder Woman, Flash, Green Lantern, Justice League, Avengers, Captain America, Hulk. Lesser known solo characters like Daredevil, Thor, Firestorm are a step above that. As they move up, they still remain Batfans and keep their cherished memories of brooding lonely RotDK Bruce or a car battery being thrown at a villain, but they expand to be fans of other settings as well.

Above the current character followers you have writer-followers, and art followers, and historians. Those fans of comics that were published before they first started reading comics, Bronze and Silver Age fans who had Modern Age childhoods are a bit higher than those fans who insist that everything be as they first started reading, but both are lower on the hierarchy than the people who go out of their way to track down the Golden Age stories that started it all. A cut above the current writer/artist followers are the ones who follow classic creators like Gil Kane, and Carmen Infantino and Gardner Fox, and at the very top of the pyramid you find your Kirby fans.

Because a fan of Jack Kirby obviously has impeccable taste.

While there's no reason to roll your eyes because someone is a fan of Batman or one of his many spinoffs, there's no reason to be impressed. Everyone has been to Gotham in one way or another. I'm probably going to laugh when someone tells me about the exacting social standards of CassandraCain-fandom. I'm probably also very likely to make fun of them. But when someone who owns Hunger Dogs and has read all of the necessary Adventures of Jimmy Olsen issues talks about what's necessary to be a Kirby fan, that's another situation entirely. 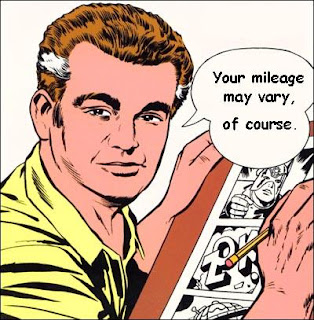 (What? Its not like I'm the only one to ever put cliche dialogue to a Kirby panel. Besides, I needed something for Jake's meme.)