How Did We Miss This?

I was been bagging and boarding my comics (turns out I had two longboxes worth just sitting around in piles) when I can across New Avengers #4 and its Spider-Woman cover. 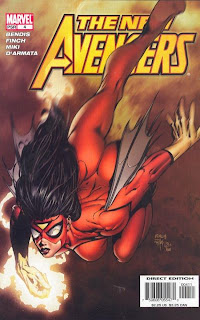 It reminded me of an old post on Mortlake on the Schuylkill where Melchior quoted a Bendis interview from Wizard Magazine:

"Wonder Woman won't sleep with you--but you have a shot with Jessica," says Bendis. "You're not waiting in line behind Superman." (p. 77)

Naturally, we all mocked him for fantasizing about ink and paper.

We missed something more damning.

It makes me wonder how many of these female characters are written as sexually open because the writer thinks an active sexuality is an interesting character trait with story potential, and how many are just written that way because they think men will only read about women they'd be able to get into bed. It also depresses the hell out of me.

On the other hand, it makes me glad I'm not reading any Bendis books right now.

It's an old quote from an old magazine, and its a point that's been made before (many times through art, and I think Melchior may have felt it was worth being left unstated), but I just had to go back and point it out again. I just wish I'd noticed it and made a bigger fuss back in February.