This week's art feature is a bit unusual, and pretty short, but I want to hear what you have to say about it.
Posted by Ragnell at 11:01 AM 3 comments:

Okay, I'm not a believer in the fabled Batman/Robin subtext. I've never seen the subtext, it just seems to me like Wertham was overreacting to seeing the strongest relationship in Batman's life with a male character and people have picked up on this since.

I'm actually pretty difficult to argue this point with.

I can see where you're coming from if you're going to argue specific interactions between Dick and Bruce that seemed slashy, you can argue if they are fatherly affection vs romantic affection. That's cool. I'll usually fall on the side of fatherly affection, unless the scene is written by Devin Grayson. But she's only one writer in sixty years worth of writers on page and screen, and she's the exception when it comes to this. Other writers tend to be very careful about how they portray the Batman-Robin relationship.

I can see where you're coming from when arguing how either character interacts with women vs how he interacts with men to argue that they are homosexual, but honestly I'd need a long road paved specifically with Dick Grayson interaction to convince me of that particular pairing. (I also find that arguments about Bruce's interaction with women indicating anything other than a repressed heterosexuality, sexuality which has been pushed aside for his War on Crime, are barking up the wrong tree -- but if you think you have a good one, you're welcome to try.)

Those, and others, are still reasonable points.

However, there is a sexist argument that I've seen drummed up in these discussions, and if I see someone use it, I'm calling them on it.

It's the "What kind of a 35 year old single millionaire would adopt a teenaged boy?" argument.

This assumes that men of a certain age are natural sexual predators, unable to interact with any children other than their own without being watched. It's a prevalent idea in our society, one that keeps men out of professions like teaching and childcare. It comes to a basic devaluation of fatherhood in early years, one that discourages men to be actively involved in parenting. It plays on the idea that dealing with children is for women, and any man who would dedicate any time with a child that he doesn't have to has something wrong with him.

Basically, it leads back to confining gender roles. It tries to shame men away from nuturing duties (because they are "woman's work" and no "real man" would do "woman's work"), and it contributes to a lot of the bad stereotypes associated with homosexual men in our society.

It is cultural, yes, but it is also wrong. It's wrong in real life, and it's simply incorrect in Batman continuity (because we know why Bruce tries to help angry young men, he sees himself in them).

It's a really sexist attitude. Now, yes, it's probably what's been printed in the Gotham gossip columns, and whispered around WayneTech Water Coolers. But come on, we've all read and watched Batman. We know Bruce Wayne far better than the extras who gossip about Bruce Wayne.

So, find something more specific, Batslashfans, because that stupid generalization just won't wash.

Oh, and if someone tells you that one of your arguments is based on a sexist stereotype, and you go "Oh, no! I don't think that about Shazam or Green Arrow" but keep coming back to the generalized argument to support your point, you're still using a sexist argument because you haven't called to mind anything specific about Batman over, say, Green Arrow or a professional wrestler, just a generalization about 35 year old men.
Posted by Ragnell at 8:08 AM 24 comments:

For my pile of overwhelming evidence that women are definitely a viable target audience for comic books:

I almost roffled. "I assure you, sir, NASA is an equal opportunity employer, and we have strict rules against sexual discrimination..."

He cut me off. Typical. "Oh, really? Then why are all the astronauts women?"

"Uh, last I looked, there were quite a few astronauts who are men."

"I believe the correct total is closer to fifteen percent..."

As my boss is evil (he made someone cry today), I'm not up to posting much new content today. Instead, here's some more links.

Chris of 2GBC gives us a page-by-page rundown of Civil War #4.

Jenn talks about the racist implications of Drow Cosplay.

In an older post I've been meaning to link, Claire on describing eyes as "Almond shaped".

And if you haven't been following the dual-blog discussion on Class and Superman, you've been missing out.

I'll be back to substantial content as soon as someone finds a soul for my boss. It doesn't look good. We looked everywhere today.
Posted by Ragnell at 5:35 AM 6 comments:

1) Submissions for the Fifth Carnival of Feminist Science Fiction and Fantasy Fans at One Hundred Little Dolls are due Today. May I direct you to the submission form or 100littledolls[at]sbcglobal.net -- the hostess' email address. You have until the end of the day. Carnival will be up on October 2nd. And I'm always looking for more hosts, email me if you're interested.

2) Been procrastinating about sending people over there, but Heidi's trying to get a letter campaign going over Wonder Woman's chronic lateness. The object is to annoy DC enough that they'll put timeliness higher on their priority list, and light a fire under their creators. Maybe, if enough people suggest it and they think there's a fanbase to support it, we can get another book to fill in the every second month (A Sensation Comics revival?).

At the very least, we can annoy them enough that they'll think twice before hiring another writer who can't keep the commitments he already has.

3) We're starting an Arisia Makeover Meme at Zamaron if anyone's interested. Anyone with actual talent, or even just delusions of talent is welcome to show off their fashion sense.

Leave a comment on the Zam post with a link, or email me if you want em to host it on Zamaron. If you're shy about giving your email, but have a drawing and some webspace to host it, leave a comment (with a name so I can give credit) with the link below and I'll link it on Zamaron.
Posted by Ragnell at 10:20 AM 5 comments:

I don't normally repost chat conversations, but this one had a good point to it.

Willow: Why is Wanda looking like she's about to have a heart attack?

Ragnell: I worry about what they consider sexy

Willow: Y'know the sexiest image of a comic heroine I've seen in the past year?

Willow: Wonder Woman at the White House, sword in hand, in her formal dress, in a semi-crouch with one leg extended forward for balance - preparing to kick Gorgon butt.

Willow: A beautiful extended leg, a ovely martial arts position and the way the clothes draped?

Newsarama has a few preview pages for Manhunter #26 up. Special (Hattip Elayne) 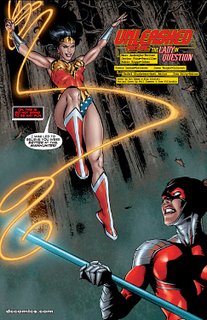 Not an official Wonder Woman comic, sadly (though at the rate we're going we'll see it before we see Wonder Woman #3!)
Posted by Ragnell at 3:54 AM 9 comments: