Blog@Newsarama informs me that the Justice League: The New Frontier DVD (which comes out on February 26th) will come with a toy at Best Buy. And I've been collecting Green Lantern dolls. And there is a brand new Best Buy very close to where I work. It's not the best Hal figure I've seen. But I still want it.

Posted by Ragnell at 12:05 PM 8 comments: Links to this post 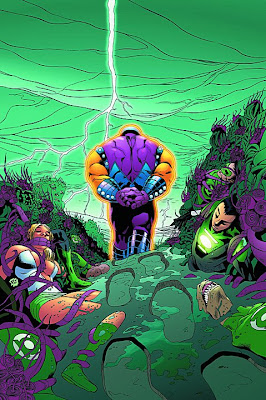 I haven't posted in too long.

I'm feeling considerably better lately, but haven't been quite motivated to post on this blog or do a WFA roundup despite the horrendous backlog that's piled up. Oh, i'm still reading and loving my comics, it's just the current discourse is driving me crazy.

I mean, just today I saw one person compare attempts to draw attention to and protest the inappropriate sexualization of women in comic books to supporting segregation and anti-semitism.

And another person throwing a fit about how "you can't reason with these kinds of fans" because a few people poked fun at her in her comments for some continuity mistakes.

And the resurfacing of the most pathetic concern troll I've ever had the pleasure of chasing off my blog, once again talking about how everyone's against him.

And one of my favorite blogs dedicating itself to a week reviewing cheerleader movies (Yes. I mean you, Chris).

And I realized that my own actions have resulted in not one, but two different people deleting their blogs and starting over. Both because I've pointed out inconsistencies in their arguments and linked them. Perhaps I can be a bit harsh at times.

I hate to use the word "over-sensitive" because too often it's applied to someone engaging in legitimate social criticism. I'm a big believer in shades of grey. I'm in favor of examining intersection of race and gender discrimination, but often comparisons merely make your original argument look absurd and end up alienating allies. I'm in favor of continuity nitpicking and joking around to a point, because we're comic book nerds and that's how we do things--and I even think that a badly placed continuity/character mistake can invalidate someone's point if it's important to the argument (for example, complaining a character is out of place when you're mistaking him for another guy) but I don't think they invalidate all points. I also don't think everyone who points out a continuity error and jokes around in comment sections is even trying to invalidate the original post. We read comics, comics are supposed to be fun and continuity nitpicking is a pasttime all it's own. I do believe in the purpose of well-reasoned discourse, but I see a place for ranting and venting all the same.

I find misogyny and racism in things I enjoy sometimes. I don't think pointing that out means we're calling something a piece of trash. I've had moments where it's ruined an otherwise good story, though.

I'm not sure where I'm going with this.

I remember when I was a kid I read The Dark is Rising sequence. There was a scene in one of the books where someone asked why the agents of the Dark wore black and white. Another character said it was probably because the Dark could only reach people in extremes. That's a thought I've carried with me for a long, long time.

The phrase "Death to Extremists" makes me smile.

I'll try to get back on a regular blogging schedule again soon.

Posted by Ragnell at 7:45 AM 8 comments: Links to this post