Honorable Denizens of Cyberspace! As your wayward Carnival Organizer, I humbly beg your forgiveness! I would have a long in-depth excuse as to why we have had such a long hiatus between carnivals, but it ultimately comes down to my neglecting my bloggerly duties in favor of icky RL responsibilities, and no one wants to hear the details of that. Sadly until such time as I learn to sustain my body purely on force of will or am able to download my consciousness directly into the blogosphere I'll have to deal with the hassles and distractions of meatspace.

But never lose your faith, feminist fans of the fantastic, for I have returned with a volunteer to host the next edition!

I'm sure you all remember Skye, who is solid, liquid, and gaseous awesome.

So without further ado, the skinny on the 21st Edition:
Where: Heroine Content
When: May 1st
How Long Until Submissions Close: Until April 28th
Who: skyekilaen[AT]gmail[DOT]com or submission form
What: Suggested theme is "Who Do You Love?" but all posts relevant to gender issues in speculative fiction will be gladly considered.

As our last edition was way back in February, the upcoming edition will accept submissions reaching back to February 7th.

(Those of you who don't know what the fuck this is about would be advised to read this.)

Posted by Ragnell at 12:27 PM No comments: Links to this post

I'm not going to go into details, but today Judd Winick caused a mild amount of strife between myself and Kalinara.

We settled it peacefully, mind you, but this very rarely happens.  I blame Judd Winick for it, and mark my words... I shall have my revenge.

In all seriousness, we do need a bet settled.  Riddle me this, dearest readers: Who would be more comfortable in a gay nightclub in the late 90s, Wildcat Ted Grant or Flash Jay Garrick?

Show your work.
Posted by Ragnell at 10:25 AM 18 comments: Links to this post

I made something pretty!

Horrified that the next Star Sapphire figure is going to be in that hideous costume, I searched about online and found the classic Star Sapphire action figure (which had ugly earrings, but those were a lot easier to cut off and paint over than fixing that dreadful costume).

When I took her out of the box the other night, I realized she was the same size as my Parallax/Hal figure.  Then I noticed that one of her hands was outstretched, with the fingers spread like she was reaching for someone.  And one of Hal's hands was open so that it could hold something, and that it fit perfectly to Carol's wrist. About that time "Written in the Stars" from the Aida cast album hit my playlist. I got inspired.

I had to make a shadowbox. After testing out about five different background ideas, I settled on a picture from an old calender. For some reason, during the entire process my playlist was queuing up love songs. when I finally finished the whole thing (which involved searching for pieces from the base, and a lot more time that I thought it would) I was listening to a cover of "I Want You to Want Me." And for some reason I'm fond of this one that didn't come out very well. It's kind of spooky and cool. What do you think? Are they not just made for each other?

Posted by Ragnell at 1:07 PM 11 comments: Links to this post

If people who are trying never get criticized because "Hey, at least they're trying," then all anyone will do is the bare minimum.  The only way to make things better is to keep at it.  Keep making things better, correct false steps.  Criticism is necessary, otherwise people won't know when they put their foot in it and they'll just continue to put their foot in it.
Posted by Ragnell at 4:17 AM 12 comments: Links to this post 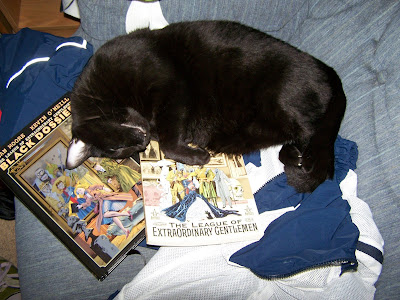 So much for tonight's plans.
Posted by Ragnell at 7:44 AM 7 comments: Links to this post