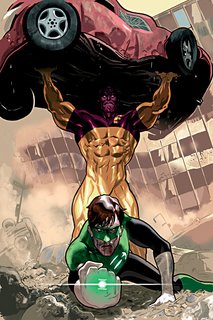 This is the first time I've ever actually done this. Oh, I've joked about it, but I've never really done it.

Not when I was 19 and picking up the habit again after Basic Training.

Not when I was 12 and reading X-Men still.

Not even when I was a young girl and stealing copies of Boy's Life from my brother (One day, I will find the end of 20,000 Leagues Under the Sea...)

Not even collecting back issues, there was always another angle to satisfy me.

I can honestly say that this is the very first time I picked up a comic book specifically to see the fight on the cover. I had been waiting for this fight since they announced Kyle would be Space-bound and Hal would be the Earth-GL.

I didn't buy the other four issues. I barely skimmed the rest of the plot. I simply read the fight.

8 had the villain on them.

4 featured the hero fighting the villain.

It cost me 3 dollars.

There was a refrigerater construct.
Posted by Ragnell at 11:40 AM