Don't Step in the Meta-Text

I was looking at the racks today, when my eyes fell on the Marvel section. She-Hulk was out. I remember a conversation on one of the Big Moneky Comics forums about the current storyline. Jennifer was defending an accused rapist. I was curious as to how it was handled.

I flipped through the end of the book, and, hands shaking with rage, I picked up that and the previous issue. 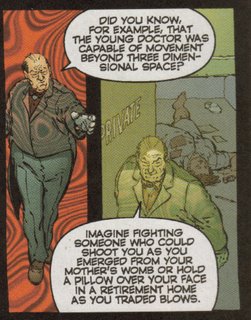 It made me think of Angela Spica. You remember back when Mark Millar was writing The Authority? He had a storyline with the Evil Doctor as the villain. He had the same powers as their teammate the Doctor, which is basically Shamanism on a Global level. In the middle of the fight, he tries to scare Angela with gore and violence, and she tells him she's not so easily freaked.

Then he reveals that he can move laterally through time.

And he does, he goes back in time to when she was a schoolgirl. 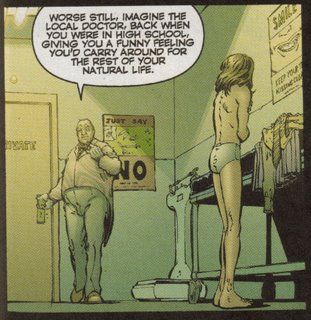 It was the ickiest thing I'd ever seen a supervillain do. Your life works out one way, you grow and change and gather experiences that make you the person you are, you person you should be, its a forward moving thing with the past set well in stone. In comic books, though, history is fluid and changing, according to the writers whims, and when they write time travel, according to the characters.

When I open a comic book, I slip off my shoes, toss the robe of reality on the lawn chair, and dive right in. When the narrative's done right, it's like swimming underwater, you concentrate on the story and immerse yourself in the little world there. If it's sympathetic, you immerse yourself in the character, in their head. You're swimming in their life. That's how I was Authority when I got to that scene. It was one of the ickiest things I'd ever read, and I dropped the book shortly after this issue.

A villain, going back in time, and changing one thing. Just five minutes in the past that reverberates through Angie's life. She experiences it and she's experienced it years ago and dealt with it and moved past it and experienced it again in the same instant! The same instant that I was swimming in Angie Spica's life.

What Angie experienced was a sexual abuse retcon like nearly every other female hero on that sad, long list that's been forming in the back of my head -- only Angie's was behind the scenes and in the story itself. This somehow makes the whole thing more powerful. 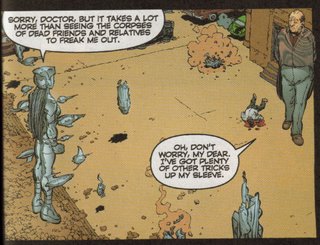 Metatextually, Angela is every one of those female characters, and the writers who are retconning this -- guess who they are. The supervillain, the Evil Doctor, doing this just to freak them out.

And, by extension, freak us out.

And that's all Mark Millar did it for. Make no mistake. He was trying to get an emotional rise out of the audience, make us squirm in our seats. Beyond that, there was no purpose, and there was absolutely no necessity.

And it's losing its power. It's not stopping me in the reading anymore, it's just making me roll my eyes in disgust and hate the writer. It's becoming like a normal fistfight through its overuse, and that is what is making me angry. I don't want to be desensitized to this. I don't want it to be a normal rite-of-passage for a female character.

I don't want to read this moment anymore.

But I bought it, and I sat down and read it again, closely this time, the whole story.

Starfox has the power to make people do whatever he wants them too, something to do with his voice. He'd been an Avenger and a superhero in the past, but in this story one of the women he woke up with brought him up on rape charges. During the course of the stories, Jennifer reveals that she seduced Starfox back when they were both Avengers together. Later on, as she cross-examines the plaintiff in the courtroom, she realizes that she may not have been the one doing the seducing after all. 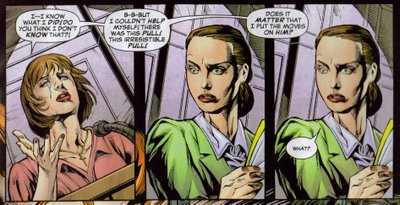 She calls him to deny it, and he hangs up on her. Even though it was years ago, she's so enraged that she leaves the courtroom and Hulks out on the staircase. 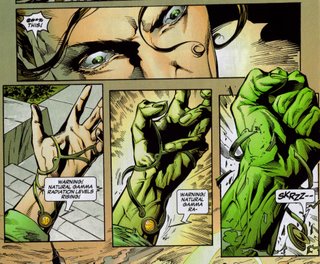 I will give credit where it is due. The story is well-done. It was clever and respectfully handled. Jennifer was not turned into a victim during this, and the retcon wasn't used to manufacture an audience bond with her. Instead, Slott writes her like a human being.

And it addressed something that's been bugging me about the Marvel Universe for quite some time now -- how it's got fifty billion telepaths, half of them use their powers to "get laid" (*Ahem* Psylocke and Cyclops) and no one calls it as the rape it is.

There's even a point where Dan Slott echoes some of the fan's thoughts about rape in superhero comics (From the voice of Stu of the record's department "I just don't think of superheroes that way. And I sure don't want to see it in my comics") and with the same character's voice let us know why he did this particular story. I can see his point and I can see why Starfox had to be officially villainized because of his past behavior. 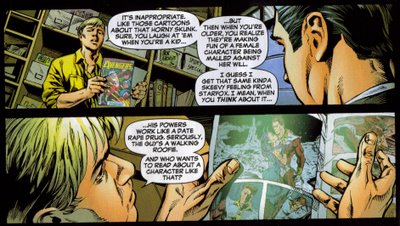 But even though it was well-done, and served two purposes,

But still, it bugs me that this, the first time I see a female character in a telepathic rape story, is the first time it finally gets called for what it is.

And it also bugs me that She-Hulk, who to my knowledge was free of sexual assault in her past, now has it retconned in there.

Yes, it does help that she got to beat the crap out of him as soon as she realizes it... 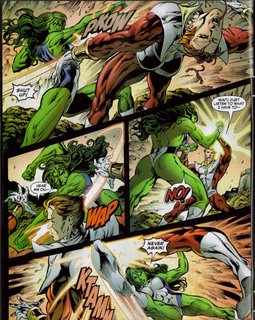 Because for every Dan Slott, there's a Mark Millar and a Kevin Smith.