My plans fell through a little bit, but I still had a full weekend. I bought a hat; went to a wild party and danced on my sprained ankle; learned to clumsily curtsy with a hurt ankle; got to judge a male beauty contest based on knees (Sadly, I didn't get pictures or mooned this year); I heard a version of the "Devil Went Down to Georgia" based on the old folktale Tamlin; filled my new camera's internal memory with pictures of the backs of kilts (I'd share, but it's still in my friend's car); got my picture taken with a cute actor, an Owl and a Hawk; and I still made it back in time to see the movie I'd wanted. 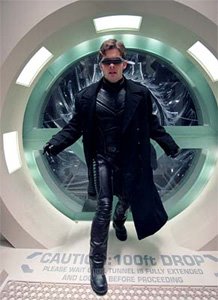 I'd never considered myself a Cyclops fan. He was always just there. Scott Summers, default leader. By being there, he was the guy in charge. He occasionally got to angst externally, very rarely about himself, but Scott was so beautifully repressed that he was perfect for the background solid, strong, silent character. It always took another character to bounce his emotions off of, and he was used to highlight their plot. He was a foil for one of the other characters. when he angsted, it was because of a plot involving Jean, or his brother Alex, or Wolverine. The emotional plot would be carried by someone else, Scott was there to enhance it by adding tension or understanding as the situation demanded. Scott was always the take-charge type. I could take or leave Scott. He never seemed extraneous when he was there, he never seem needed when he wasn't. I was neutral to the character.

Until I saw this movie.

This movie effortlessly showed me just how much I loved the uptight, restrained, perpetual-stick-up-his-butt, macho holding back his feelings, cowboy wannabe Scott Summers.

I am, now and forever, a Scott Summers rabid fan. I love him, and always will.

And you should all be impressed with this movie's ability to show how necessary and unique the underappreciated leader of the X-Men is. We should all be rabid Scott-fans come the end of this movie, because the way in which they chose to foster the Scott-love was clever and unique.

They chose to foster Scott-love by virtue of his absence.

Yes, ladies and gentlemen, for the very first time in Fourteen years of X-posure to the cartoon, the movies, and the comic book, I saw a plot where Scott Summers should be present, but wasn't.

As a kid, I always felt bad for poor Hera, the goddess of marriage, trapped in that farce of a union with Zeus. She needed a divorce and a new man, but as that wasn't possible, and it wasn't possible to control Zeus' behavior (she tried once), she tried the best possible course of action -- making an affair with Zeus more trouble than it was worth. For that, she was always demonized and vilified and just plain trashed. Women like Athena and Artemis, who could never imagine themselves in that situation, and even some of Zeus's affairs (like Hermes' mother Maia), regularly looked down on her and did their best to help out the criminal in the relationship, the out of control and unfaithful husband. People shook their heads at her and told "Shrewish wife" jokes about her. Rather than be the symbol of united love she shopuld have been, Hera is remembered as uncontrolled jealousy (Even though she showed no jealousy towards the earlier two wives -- Themis and Metis -- or towards her own sister Demeter who had a daughter with Zeus) and a symbol of the supposed prison of marriage (which is still present when you see people making "Are you sure you wanna suffer like the rest of us?" jokes about it to gay right's advocates). And people say Zeus is the one who was cursed! Ha!

When I was a little older, I got into Arthurian romance. I never liked Guinevere and Lancelot. Here was a love triangle, and there was the non-marriage being touted as the purer emotion. The better love! The "if only things were different" matter. And so, for breaking promises, jeopardizing the kingdom, giving into their own desires rather than loyalty to society, the two are glorified as the ideal example of courtly love. Admittedly, I did feel sorry for Guinevere, before I actually read the story and saw her kick Morgan's lover out of court for the same damned thing. Hypocritical and worthless. Guinevere embodied the worst stereotypes of femininity, and was surrounded by considerably more positive female characters (including Arthur's unfairly villified sisters), and yet she remains the most notable female in the Cycle. Why? Because she was bartered for beauty, deified for it, and she attracts the attention of a particularly good bruiser. And she's still generally portrayed as a positive character! Which again, makes a mockery of marriage.

At least, though, with Lance and Gwen we had a small bit of redemptive guilt, unlike with Tristan and Isolde, who both needed to die. Badly. They were outright shameless and didn't feel the least bit bad about it. Bastards.

But to the side was X-Men. I was always fond of the Jean-Scott-Logan triangle. Why? Because there, in an idealized modern setting without all of the societal quantifiers that can make a marriage unequal or a trap, the right couple got married. Yes, there was an animal attraction to Logan, but it was always properly resisted, and for the right reasons. Not for a sense of duty or a need to keep a contract together. No, Jean resisted her attraction to Logan because she actually loved Scott Summers, and he loved him. The two belonged together. They were paired since Uncanny X-Men #1. It's part of why I didn't mind Emma Frost macking around Scott when Morrison was writing New X-Men. Because it was assured that the stronger relationship was between Scott and Jean and once Scott got his head clear enough, he'd be back to Jean's side, just as she always was when she split off with Logan. In Age of Apocalypse the two were so drawn to each other that even though Scott was on the villain's side and Jean was with Logan, they ended up making a break for it together. It didn't matter that Jean was dead/absent and Scott had tried to replace her, or that Scott was dead/absent and Jean tried to replace him, or that they were in a wacky alternate timeline, the bond always won out in the end. These two people were meant for each other, and neither Logan's animal magnetism nor Emma's mental meddling could ever seriously mess that up.

So, why, in this travesty of a movie, did Scott Summers die by his wife's hands to be replaced by Logan as the one who talks her back from the brink of destroying the world?

That's quite a slap in the face. X-Men goes from a clever idealized parallel to an actual Arthurian story. Lancelot wins again, the loyal knights who respect marriage, women's choices, and don't sleep in other people's tents (when they're occupied) are beaten into the ground, Arthur is shown as an ineffective king prone to rages of jealousy and easy manipulation, Guinevere the damnable is glorified for weakness while Morgan the Wise is vilified for strength.

Meanwhile, on the other side, they try to replace Scott as Leader with Storm -- only to have him actually be replaced, once again, with Wolverine who ends up making all the command decisions while Storm looks lovely in her silvery cape and new haircut. (If the rumor that Scott got cut because Halle Berry demanded to be the central character is true, then she got totally snowed in that deal.)

And even though Scott's only face value is in reference to the Great Wolverine as a sparring partner, they can't even leave him with that dignity. Instead, they manufacture tension between Wolverine and Beast, and resolve it with little of the emotional involvement or joyful banter they had during the first flick.

Hugh Jackman is a beautiful-looking man, but dammit, I'm sick of seeing Wolverine carry the X-Men franchise to the detriment of the many rich and varied personalities and relationships found in the comic books.

And that's just the Beginning of the Problems with this Movie.

(Oh, and while I hate having to say this, I'm just going to jump the gun here because you never know -- if someone links to this post in a misguided attempt to support an anti-gay marriage argument, they are a moron, as this is about fidelity and trust and not politics. Thank you.)

(And the same goes for trying to support anti-divorce or "Feminists killed marriage" or any other idiotic arguments. I mean it, marriage is a sacred bond and not to be twisted into legal slavery by puritans who put their noses into other people's business.)
Posted by Ragnell at 1:14 AM